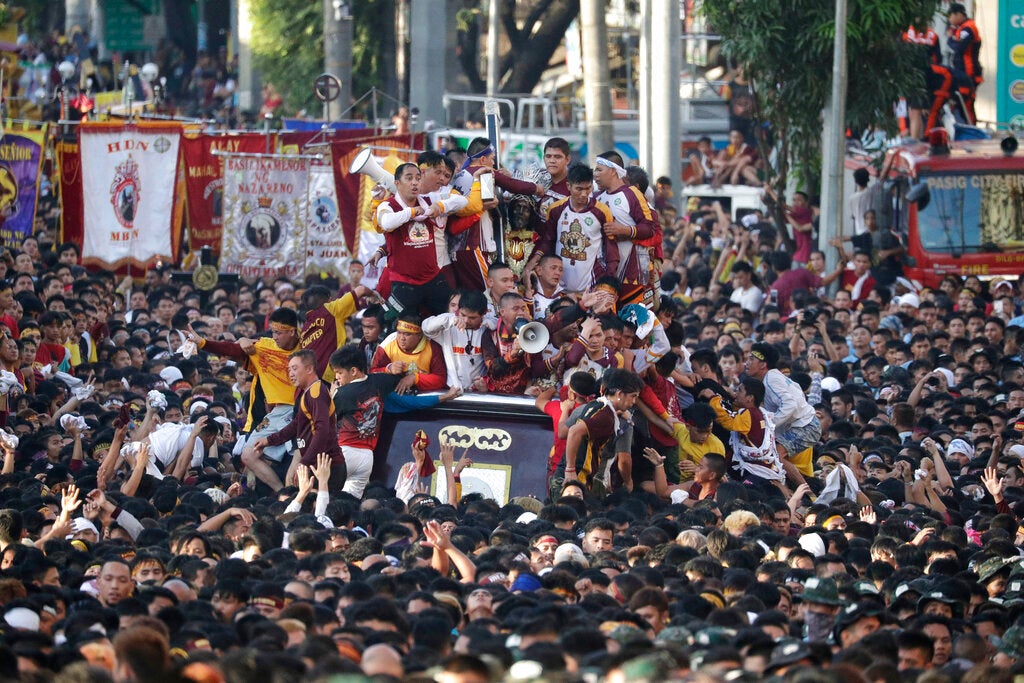 Devotees try to climb the carriage of the Black Nazarene during a raucous procession to celebrate its feast day Thursday, Jan. 9, 2020, in Manila, Philippines. A mammoth crowd of mostly barefoot Filipino Catholics prayed for peace in the increasingly volatile Middle East at the start Thursday of an annual procession of a centuries-old black statue of Jesus Christ in one of Asia’s biggest religious events. (AP Photo/Aaron Favila)

MANILA, Philippines — Over 2.3 million devotees joined the Traslacion or procession of the image of the Black Nazarene as the “andas” or carriage bearing the image stopped in front of the San Sebastian Church for the traditional “Dungaw” on Thursday afternoon.

In a Viber message the Manila Public Information Office (MPIO) said that as of 5:16 p.m., around 2,300,500 Catholic devotees swarmed the image of the Black Nazarene during the “Dungaw” which recreates the scene of the meeting between the suffering Christ and the Virgin Mary.

The MPIO added that around 105,000 devotees were stationed at the San Sebastian Church while 145,000 people were in the Quiapo Church, which is the end of the hours-long procession.

The Traslacion is expected to finish early this year with the help of the “andas” wall, which is a new security measure to keep devotees from blocking the Black Nazarene image.