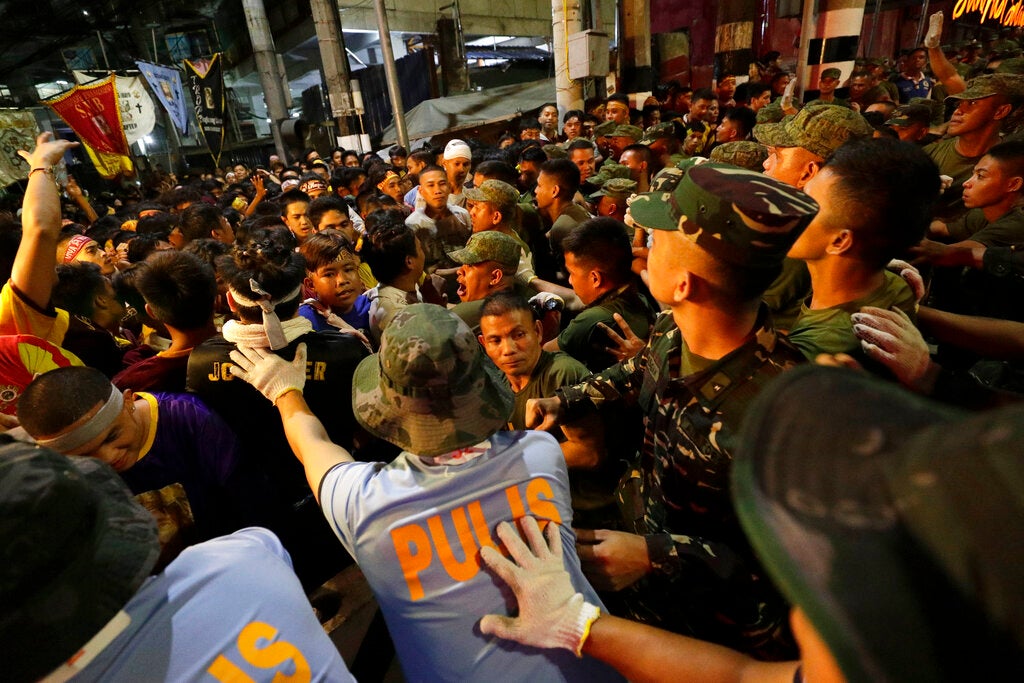 Filipino Roman Catholic devotees are pushed by police and military as they try to break the barriers to go near the carriage of the Black Nazarene during a raucous procession to celebrate its feast day Thursday, Jan. 9, 2020, in Manila, Philippines. A mammoth crowd of mostly barefoot Filipino Catholics prayed for peace in the increasingly volatile Middle East at the start Thursday of an annual procession of a centuries-old black statue of Jesus Christ in one of Asia’s biggest religious events. (AP Photo/Aaron Favila)

MANILA, Philippines — The Philippine National Police (PNP) on Thursday urged devotees participating in this year’s Traslacion to remain calm and cooperate with the police’s tight security during the event.

Police have tightened security measures and  tweaked several rules in the procession of the Black Nazarene image, which the PNP admitted could be “frustrating” for devotees as they could not show their devotion “the way they traditionally used to do it.”

Devotees can only climb onto the carriage carrying the Black Nazarene image only from the back as police will secure the front and side of the carriage to prevent devotees from blocking its path.

This is to shorten the procession of the image to Quiapo Church, which usually takes hours to complete.

“We understand how some devotees feel frustrated for not being able to show their devotion the way they traditionally used to do it due to tight security,” the agency said in a statement.

“We appeal to all devotees to remain calm, continue to cooperate and not harm the police security detail,” it added.

“We only want the Translacion 2020 to be held successfully, safe and orderly, with no untoward incident for the benefit of all,” it further said.

A total of 13,624 police officers were deployed to ensure the security of participants of the Traslacion in the streets of Manila, the Department of the Interior and Local Government (DILG) earlier said.

Ten firetrucks from the Bureau of Fire Protection and three water assets from the Philippine Coast Guard are also stationed near the procession route to respond to any possible fire incidents, it added.