Devotees leave behind 14 truckloads of garbage 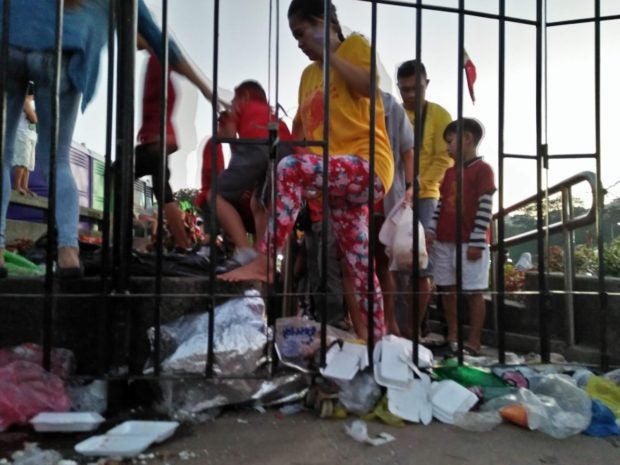 Trashlacion or Traslacion? About 14 trucks of garbage have been collected since the procession of the image of the Black Nazarene started Thursday morning. INQUIRER.net

MANILA, Philippines — Barely six hours since the Traslacion of the Black Nazarene started Thursday, 14 truckloads of garbage have already been collected by the local government of Manila.

As of 10:21 a.m., Manila’s Department of Public Services (DPS) said it already collected 14 dump trucks — equivalent to 68 to 70 tons of garbage — from Quirino Grandstand and Luneta, up to Ayala Bridge.

Manila Public Information Office (MPIO) Chief Julius Leonen explained the said amount of garbage were collected from the start of the procession. He said the Manila city hall is regularly being apprised by the DPS  of the amount of garbage it had collected.

“Mula nung nag-start ang procession up to 10:21 am, pero limited lang ang data na yan sa mentioned areas,” Leonen said. “That is not the final count for the entire city.”

This, despite the appeal of environmental groups and the Manila local government for a trash-free procession this year.

Last year, the Metropolitan Manila Development Authority (MMDA) said it collected 43 truckloads of garbage after the procession which lasted for about 21 hours.