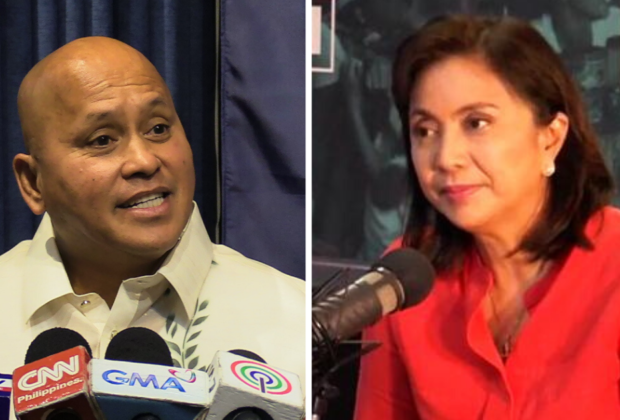 “When she complained why users and pushers are lumped in the same rehabilitation centers shows her ignorance of the drug problem,” Dela Rosa said in a statement.

“Why would not they be lumped in one rehab center when both are addicts?  Doesn’t she know that pushers are also users? A lot of addicts are drug pushers to sustain their need to use drugs. That’s why they are lumped in the same rehab — because they need the same treatment for addiction,” Dela Rosa said in Filipino.

Dela Rosa made the remark after Robredo made public her report on the government’s bloody drug war.

Citing police data, the Vice President revealed that only less than 1 percent of the shabu supply and drug money in the country was seized in the last three years.

“I don’t understand her. She said there was no data or not enough data available from the government pertaining to the accomplishments on the war on drugs. Now she makes a presentation that only 1 percent of drugs and money was confiscated,” Dela Rosa said in a text message written in Filipino.

“Where did she get her data?  Or maybe she only used the data that could destroy the government and not those that would project a good image  — just like what she was insisting abroad that there are now more than 20,000  EJK  victims from the war on drugs and she does not want to accept the 6,000 plus deaths from the government,” he added.

Senate President Vicente “Tito” Sotto III said Robredo raised “some very valid points” in her drug war report. He said, however, that he did not agree with her opinion that the drug war was a failure.

“War vs drugs fails only when you stop fighting. It’s a constant battle vs drug dealers, drug dependents, corrupt officials and cerebrally challenged critics,” Sotto said in a separate statement.

Sotto said Robredo’s perspective was also “very different and misplaced” from his own experience in fighting  drugs since 1988.

“My experience in QC [Quezon City] which was emphasis on prevention brought down the drug stats from 54% prevalence to 9% in 1992. Ayaw nila makinig sa akin, eh di hwag!”  the Senate leader added.

Even Sen. Panfilo Lacson would rather say that the drug war “has not been successful enough” but would not call it a failure.

He reiterated his earlier statement that there might be a need to shift the focus on the supply side more than the demand side — or the so-called low-life street pushers and the arrest should be directed at big suppliers.

Intelligence, he said, should also be given utmost priority, and a “no-mercy policy against corrupt anti-drug law enforcement operatives must be implemented immediately.”

“Having said that, the war against illegal drugs is a continuing fight and therefore, I would rather say, it has not been successful enough rather than call it a failure,”  Lacson said.