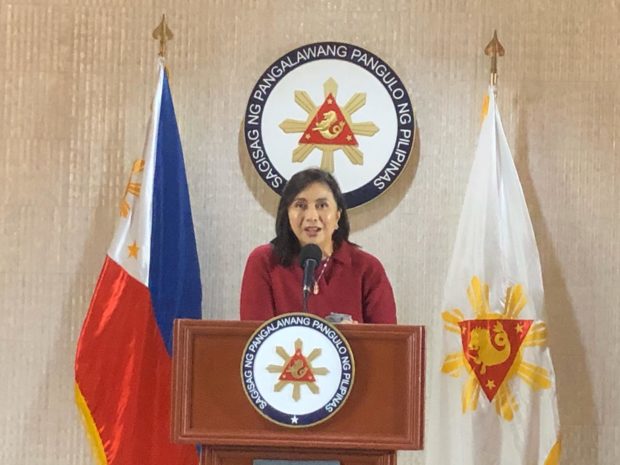 Vice President Leni Robredo discusses her report on the Duterte administration’s drug war during a press briefing at the Office of the Vice President in Quezon City on Monday, January 6, 2020. Noy Morcoso/Inquirer.net

MANILA, Philippines — President Rodrigo Duterte’s drug war is a “massive failure” as the government hardly scratched the surface of the society’s problem despite all the money and resources given to it by the administration.

In her public report Monday, Vice President Leni Robredo said that if it were an exam the Duterte administration would have scored poorly at 1/100 since it only managed to curtail a measly 1% of the total projected illegal drugs and drug money exchanged on the streets. She insisted there is a need to change the government’s strategy to tackle the problem of illegal drugs.

Robredo’s report was based on her observations during her short stint as co-chairperson of the Inter-Agency Committee on Anti-Illegal Drugs (ICAD).

Robredo added that the Anti-Money Laundering Council (AMLC) was only able to freeze P1.4 billion of drug assets – a meager amount since 3,000 kilograms of shabu translates to P25 billion per week or P1.3 trillion per year.

(The 3,000 kilos of shabu per week is worth P25 billion. This means that P1.3 trillion is the value of shabu being circulated each year. But also according to the official data, only P1.4 billion was constrained by AMLC from 2017 up to 2018… This is less than 1 percent of the money circulating from the drug trade.)

(We were able to net only less than 1 percent of the total supply and money earned from drugs. Let’s think about it. If this were an exam, the government’s score would be 1/100. From this data, we can see that there’s a need to change the strategy.)

According to the Vice President, continuing with the same anti-drug tactic and policy – even if more drug users and pushers are either arrested or killed – could even boost the illegal drug trade in the country.

(It is really a failure because the campaign against illegal drugs has so many aspects but the street level enforcement became the only focus. Even if this is done every day if the supply constriction is not given attention… the problem is never really going to end.)

She then suggested that ICAD chairmanship be transferred to the Dangerous Drugs Board in order to change the anti-drug approach. Currently, ICAD is chaired by the Philippine Drug Enforcement Agency (PDEA).

Duterte appointed Robredo as ICAD co-chair on October 31, 2019, following his frustration over her criticisms on his war on drugs.

While at ICAD, Robredo pushed for the eradication of Oplan Tokhang, strengthening of community-based rehabilitation programs, and the creation of baseline data on the drug war.

All these points, she noted, were mentioned in her 40-page report already submitted to Malacañang.