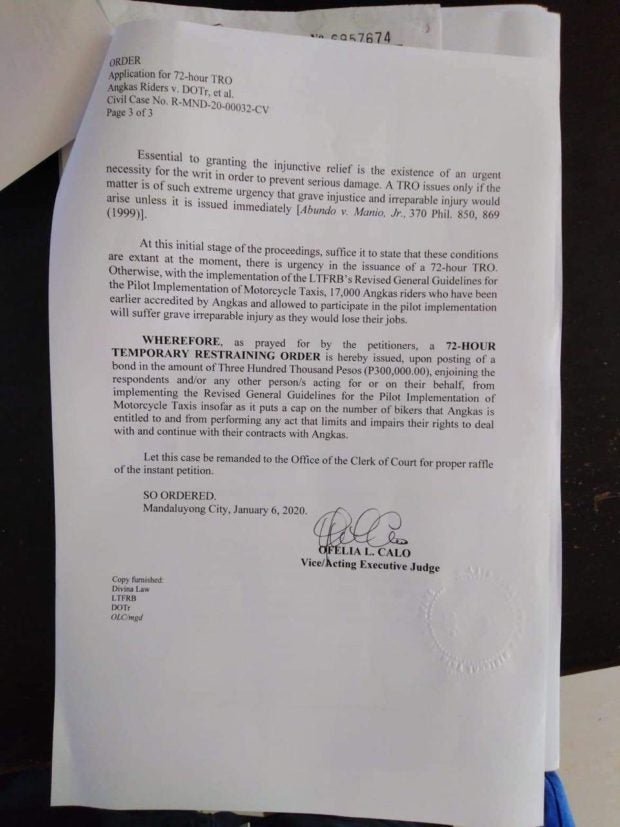 Dispositive portion of the TRO signed by Acting Executive Judge Ofelia L. Calo on the class suit filed by Angkas riders against the biker cap being implemented by the government.

MANILA, Philippines — The Mandaluyong City Regional Trial Court on Monday issued a 72-hour temporary restraining order in the implementation of the government’s ceiling on the number of motorcycle taxis allowed to participate in the ongoing pilot run.

“Wherefore, as prayed for by petitioners, a 72-hour temporary restraining order is hereby issued, upon posting of a bond in the amount of P300,000, enjoining respondents… from implementing the Revised General Guidelines for the Pilot Implementation of Motorcycle Taxis insofar as it puts a cap on the number of bikers that Angkas is entitled to, and from performing any act that limits and impairs their rights to deal with and continue with their contracts with Angkas,” the court stated.

The operators — Angkas, JoyRide and MoveIt, were given an allotted cap of 39,000 registered bikers — 10,000 bikers per transport network company (TNC) for Metro Manila and 3,000 bikers per TNC for Metro Cebu.

Angkas slammed the move as “anti-competitive” and “morally wrong,” adding that 17,000 of its biker-partners stand to lose their jobs. Its current workforce is at 27,000.

“At this initial stage of proceedings, suffice to state that these conditions are extant at the moment, there is urgency in the issuance of a 72-hour TRO,” the court said.

One of the petitioners, Angkas biker Rommel Villanueva, said the court order is proof that “justice is on their side.”

“We are only trying to make an honest living and helping commuters every day to get to their destinations fast and safe,” he said in a statement.

“Why should the government stop us? Why should our families go hungry? We are not doing anything wrong,” he added.

In June last year, a six-month pilot run was approved to aid Congress further evaluate pending bills seeking to legalize the use of motorcycles as public utility vehicles (PUVs). The pilot run was originally set to end on Dec. 26.

TWG chairman and LTFRB board member Antonio Gardiola earlier said the extension of the pilot run will provide TWG more time to widen the scope of their study on appropriate standards and capacities for motorcycles to be considered safe, convenient, and eligible for franchise.

“We want to determine their operational readiness and compliance. We also want to determine whether or not motorcycles are really a safe and viable form of public transportation. That is always our priority — the safety, security, and comfort of the riding public,” Gardiola said in an earlier statement.