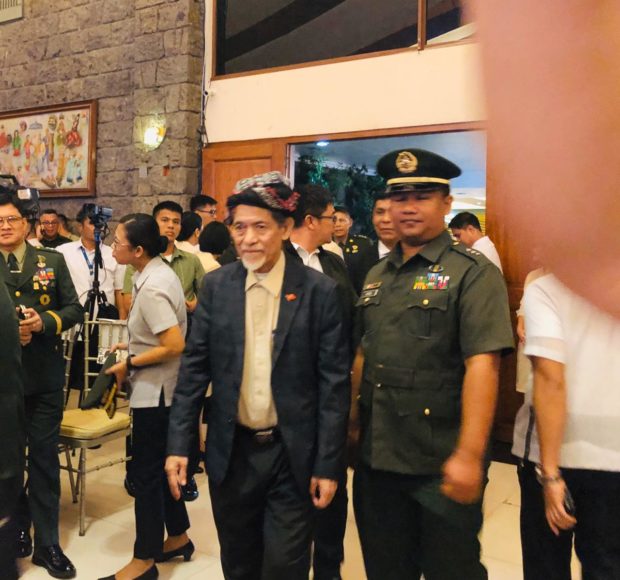 MANILA, Philippines — President Rodrigo Duterte called on the Armed Forces of the Philippines (AFP) to remain relentless in its fight against lawlessness and terrorism.

“I trust that you will work in unison with the incoming Chief-of-Staff Lt. Gen. Felimon Santos Jr. as you remain steadfast in protecting our country against lawlessness and terrorism,” Duterte said in his speech at the Change of Command ceremony at the Camp Aguinaldo in Quezon City.

This was Duterte’s first public appearance in 2020 after he skipped his scheduled visits to quake victims.

Duterte assured the AFP “that you will always have my full support and confidence as we build a more stable and peaceful future for our people.”

“Be assured that this administration will always assist the men and women of the Armed Forces of the Philippines as we overcome the challenges we face as a nation,” he said.

The President said he was “confident that the AFP will further achieve more milestones in protecting our freedom and democratic values” under Santos.

“It is my hope that you will carry out programs that will elevate competence, the probity, and integrity of our uniformed personnel,” the commander in chief told Santos.

“May this momentous occasion renew your commitment to defend our homeland from lingering and emerging security threats as you uphold the safety of our families and communities,” he added.

Duterte also lauded Clement for the performance of his duties during his time as AFP chief.

“Your stint at the helm of our military will be remembered for your principled and irreproachable leadership in fighting insurgency and securing our sovereignty,” he said.

“I likewise laud your spirited efforts in spearheading the humanitarian assistance and disaster response of the AFP. With faithful adherence to the military professional service inspires your troops to continue serving with valor, heroism, and selflessness,” he added.

He then urged the AFP to “embody solidarity as we pursue a more peaceful future for all.”