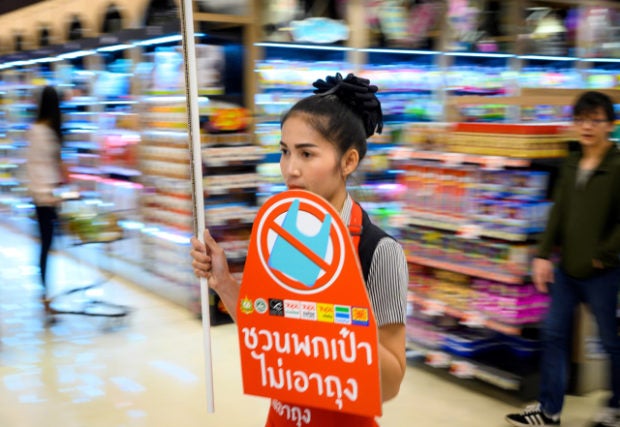 An employee carries a banner informing customers about the ban on free single-use plastic bags at a shopping mall in downtown Bangkok on January 2, 2020. Image: Mladen ANTONOV / AFP

Thai shoppers grabbed baskets, buckets and even a wheelbarrow to skirt a new ban on single-use plastic bags at big retailers, with many posting images of their efforts online.

The restriction, introduced at the start of the new year by several major mall operators and the ubiquitous 7-Eleven convenience stores, was a victory for environmental campaigners in a country where individuals use an average of eight plastic bags a day.

Customers can now pay a small fee for reusables but budget-conscious shoppers saved money by grabbing anything available and celebrating the different choices on social media.

Make-up artist Acharin Prahausri borrowed food-storage netting from his mother that she normally dries fish with, tossing snacks, milk and juice and posing for a photo at a 7-Eleven in eastern Thailand.

“It’s normally used to protect from flies,” he told AFP, as his post racked up more than 1,600 likes.

In other posts, one man grinned at the camera as he held a wheelbarrow laden with bottles of water, paper towels and soap. Another two women clutched each side of a pink laundry basket heaving with goods.

Experts say Thailand is one of the largest contributors to ocean pollution.

But awareness about the problem has spread over the last year as images of dead turtles, whales and dugongs with pieces of plastic bags clogging their stomachs went viral.

A government campaign to eliminate their use by 2022 has even seen television channels pixelating plastic bags onscreen — alongside other no-gos such as alcohol and smoking.

Environmentalists have praised the ban as an important first step but say more needs to be done to eliminate a throw-away culture.

But some shoppers were ready for the change.

“I have been avoiding plastic bags for a while already,” said a Thai office worker at the Big C supermarket chain on Friday, clutching a tote bag. NVG