Sales of fruits, fireworks decline this year in Bohol 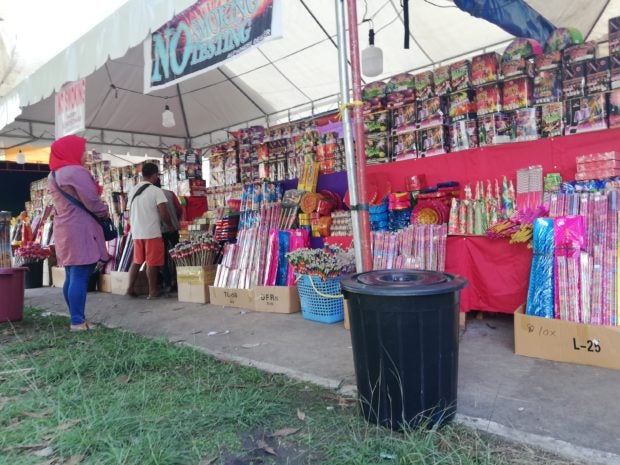 TAGBILARAN CITY–Firecracker and fruit vendors in Bohol have reported low sales during Christmas and days before the New Year celebration.

Evelyn Estomata, 38, opened her stall two days before Christmas outside the Tagbilaran City Square, which she has been doing for the past 20 years.

She sells apples, oranges, watermelon, bananas, grapes, pineapples and grapes sourced from a merchant in Cebu City. Beside her are other fruit stands that sell the same kind of fruits.

But sales has been down, she lamented.

Fruit vendors believe that the rain spawned by typhoon Ursula that affected central Philippines, including Bohol, triggered their dismal sales.

“We earned money last year compared to this year. Maybe the typhoon or the rains prevented the customers from buying,” Estomata said.

It has become a tradition to many Filipinos to display 13 varieties of round fruits to welcome the New Year since doing so would bring good luck for the coming year.

Even sales of firecrackers were low.

“We only had a few customers compared to last year,” said firecracker vendor Ashary Macabangkit.

Macabangkit, 28, a resident of Tagbilaran City, was one of the vendors in 10 firecrackers/fireworks shops in makeshift tents found along the highway in Barangay Taguihon in Baclayon town.

Taguihon has been designated area for selling and buying of pyrotechnic materials.

Macabangkit expected the sales to perk up on Dec. 30 and 31 especially from last minute shoppers.

Macabangkit said he and other sellers were able to secure certifications from the Philippine National Police (PNP) regional office, the Bureau of Fire Protection, and they finished a mandatory one-day seminar held in Lapu-Lapu City, Cebu.

For safety, a “No Smoking” and “No Testing” signs and a barrel of water were displayed in the establishment.