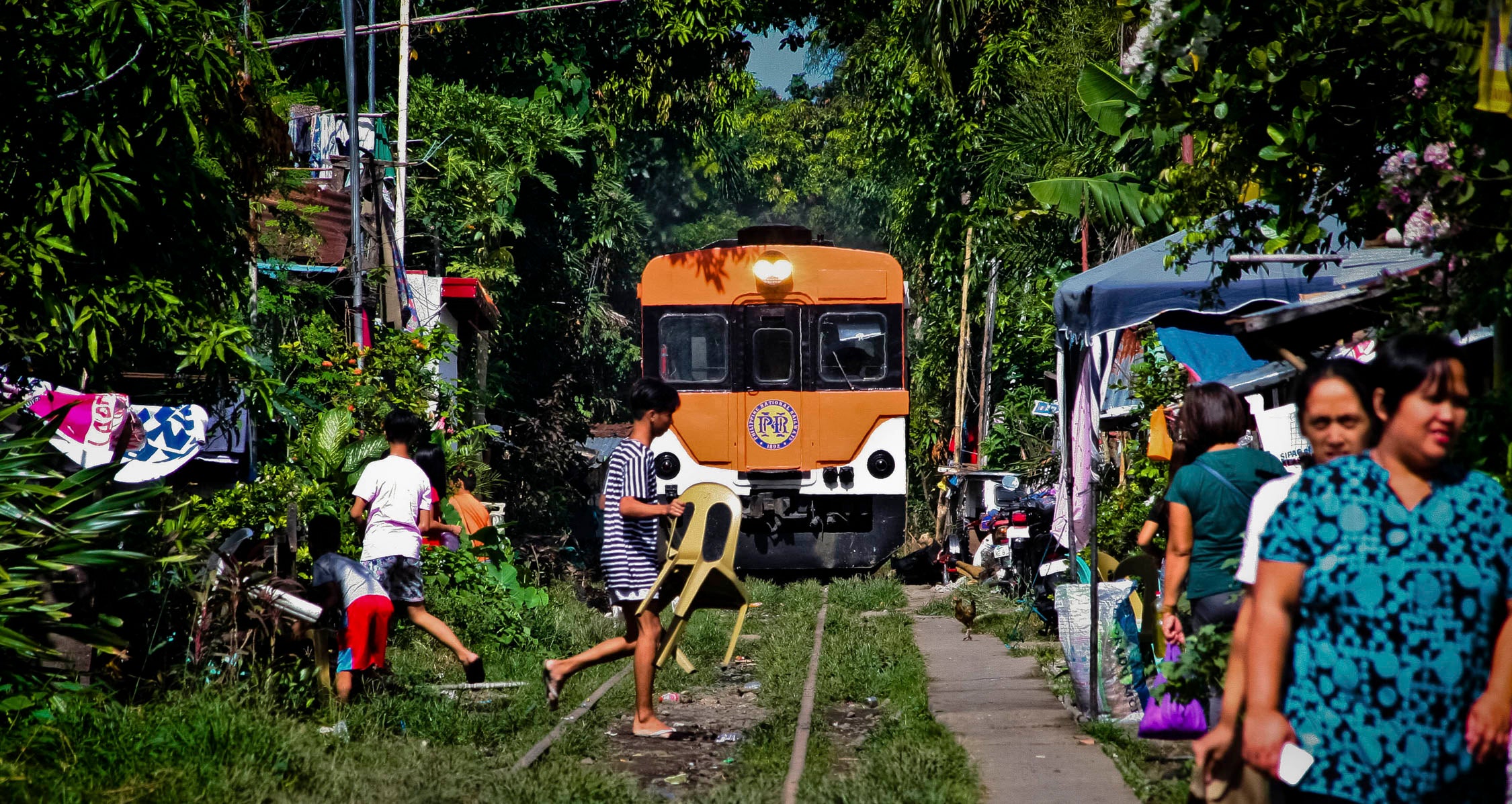 RAILROAD CROSSING In this photo taken before Christmas, residents living along the railroad at Barangay San Antonio in Los Baños, Laguna, go about their day unmindful of a passing train. The Philippine National Railways resumed its regular trips from Metro Manila to Laguna this month. —CHRIS QUINTANA/CONTRIBUTOR

SAN PEDRO CITY—The Philippine National Railways (PNR) has appealed to communities along the railroad from Metro Manila to Laguna province to respect public property and be mindful of commuters’ safety after the agency recorded incidents of stoning and vehicles crashing on trains.

In December alone, the PNR recorded at least 14 incidents of rock-throwing and of people dumping trash or placing debris in the middle of the tracks at various points between the Tutuban station in Manila and the train stop at the International Rice Research Institute (Irri) in Los Baños town, Laguna.

These also included people splashing water onto incoming trains or using slingshots to target the train’s glass windows from a distance.

Crissy Ecalnea, PNR’s senior executive head, said the PNR was lucky there were no incidents yet of residents throwing human waste, one of the classic horror stories that involved Philippine trains.

But a couple of accidents, involving cars or other vehicles that tried to beat the train, have happened since train trips became more regular a few months ago.

For a long time that the PNR was out of operation, Ecalnea said people needed to be reminded of train safety protocol, as basic as having to stop at a railroad crossing.

She said they were hesitant at first to go public in fear that such incidents of stoning might only encourage more vandals, but realized they needed people’s support to keep the trains running.

All the PNR and the Department of Transportation (DOTr) could do for now was to appeal to the public to stop the “misdeeds,” which they said were both “disturbing” and “disruptive” of train operations.

“We are now closely coordinating with the proper law enforcement authorities to immediately investigate and hold responsible these hooligans and misfits,” Transportation Assistant Secretary Goddes Hope Libiran, the official overseeing the DOTr’s communications and commuter affairs, said in a statement.

Ecalnea said the viral photos that showed the train’s glass windows broken were of the old Kogane train, donated by Japan, and which runs up to the railway’s final stop at Irri in Laguna.

The brand new trains, which the government purchased from the state-owned Indonesian company, PT Industri Kereta Api (PT Inka), were not damaged as its glass windows were covered with another layer of protection, she said.

“I would also like to clarify that the trains were not broken but were perfectly working,” Ecalnea said.

The PNR started its inaugural run for the six new trains on Dec. 16.

In an online interview on Saturday, Ejercito said “security and order” seemed to be the PNR’s “greatest challenges” in reviving the century-old mass transit eyed as a solution to traffic congestion in Metro Manila.

“There are residents along the railway tracks that view [the train operations] as a threat to their eventual eviction or as danger to their lives when it should be the other way around,” he said.

“Priority should be given to those who reside beside or near the railroad tracks as the PNR and the DOTr embark on the modernization and rehabilitation of the PNR north and south lines,” he added.

Ecalnea said while they had been conducting weekly clea­ring operations, “thousands” of informal settlers remained or “have kept coming back” inside the tracks’ 7-meter danger zone.

She said people and local governments should not feel “displaced [by the train] as they should have not [settled] there in the first place.”

Read Next
Sales of fruits, fireworks decline this year in Bohol
EDITORS' PICK
Water remains our saving grace right now
BREAKING: 3,226 latest COVID-19 cases bring PH’s total to 106,330
Smart 5G goes live
A gem of a residence in the new normal
PNP: Checkpoints back in MECQ areas
Been there, done that but what’s the difference between MECQ and GCQ?
MOST READ
Metro Manila, 4 other areas back on lockdown
MECQ guidelines in infographics
You’re my ‘idol’ in crafting laws, neophyte senator ‘Bato’ tells Drilon
Citing Duterte order, Lorenzana says PH won’t join other navies in South China Sea drills
Don't miss out on the latest news and information.