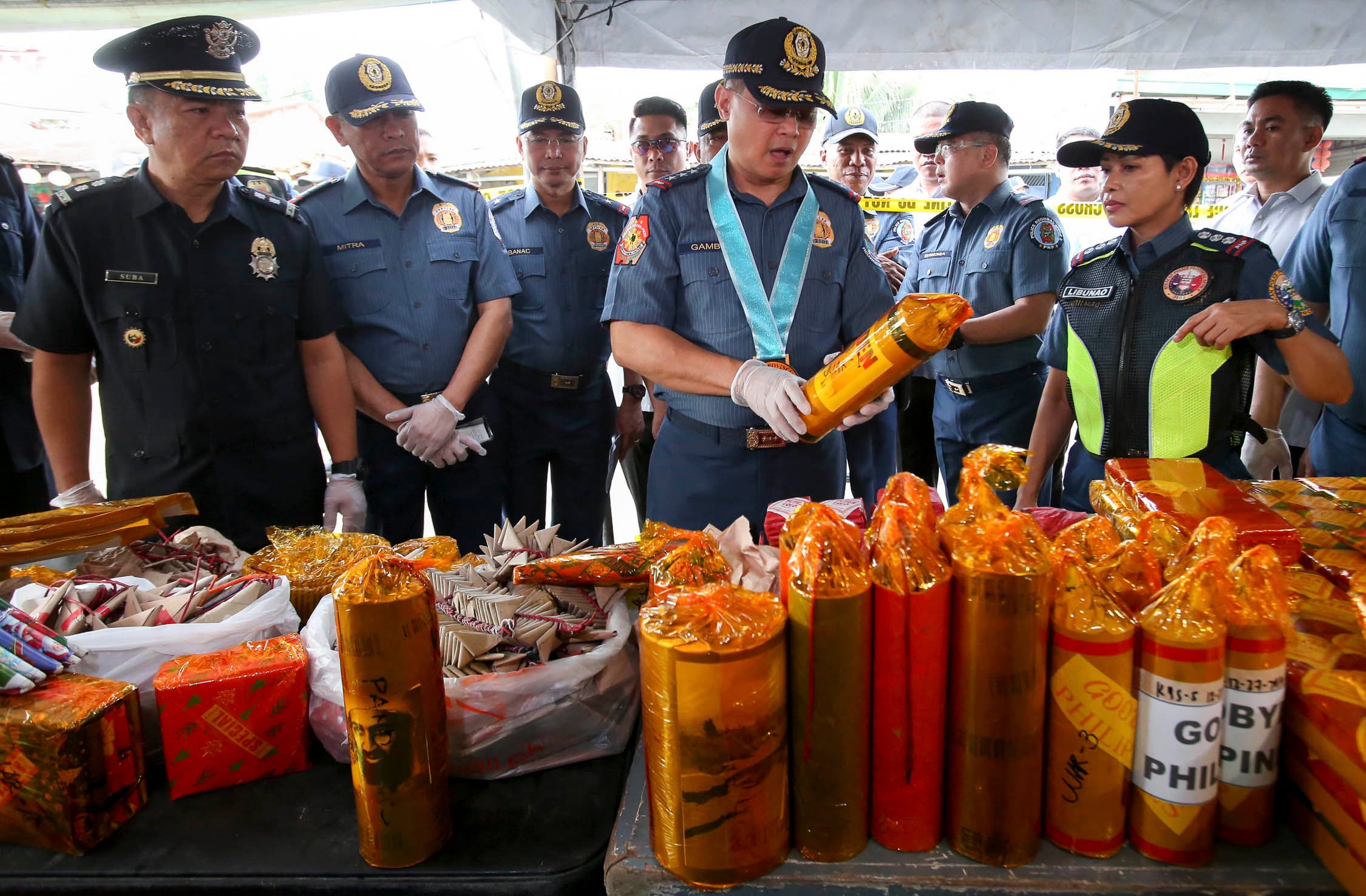 BOCAUE, BULACAN—Local officials and teams from fireworks organizations inspected the safety measures enforced at two “pyrozones” where firecrackers and pyrotechnic devices are sold, following a 6 p.m. fire that hit a store in this fireworks-producing town on Saturday.

It broke out hours after Police Lt. Gen. Archie Gamboa, acting chief of the Philippine National Police, destroyed P100,000 worth of illegal firecrackers in a ceremony at the Barangay Turo pyrozone.

The fire destroyed products sold by A.T. Sayo, a manufacturing firm owned by Allaine Sayo, said Police Lt. Col. Rizalino Andaya, Bocaue police chief, on Sunday. The owner’s sister, Bianca, was attending to customers when they heard an explosion at the store’s stockroom.

Bianca, two of her sisters and all seven store attendants managed to leave the store before the fire spread and destroyed two vehicles, a motorcycle and a bicycle. Firefighters put out the fire at 7:15 p.m.

The blaze prompted teams from the Philippine Pyrotechnics Manufacturers and Dealers Association Inc. (PPMDAI) and the Bocaue Fireworks Association (BFA) to visit stores on Saturday night and Sunday morning to see whether they were following safety guidelines, said Bocaue Mayor Joni Villanueva-Tugna.

All stores selling firecrackers and pyrotechnic devices here are required to have fire extinguishers and drums of water or sand to extinguish wayward items and stop fire from spreading.

PPMDAI and BFA are also verifying the source of illegal firecrackers that are out in the market.

The items that Gamboa destroyed on Saturday included powerful firecrackers like “Kabasi,” “Goodbye Philippines,” and “Bin Laden,” which are still being produced by illegal ma­nufacturers because of the demand, Andaya said.Earlier on Friday, Police Capt. Norheda Usman, the officer manning the town’s pyrotechnic zone, was relieved for abando­ning her post at the height of the New Year holiday rush.

It was the second time that Usman had left the precinct. Earlier last week, a team sent by the Bulacan provincial go­vernment to monitor fireworks traders could not locate Usman, Libunao told reporters.

“This is a crucial time for us law enforcers, especially for her who was assigned as chief of the fireworks zone,” she said.

As of Friday, 14 Central Luzon residents had been injured while igniting firecrackers in the run-up to the New Year revelry, records from the Department of Health (DOH) in the region showed.

The patients, most of them boys and men under 20 years old, suffered blast injuries in the hand and head and are being treated in 10 public hospitals in the region.