Carpenter killed in front of wife on Christmas Day 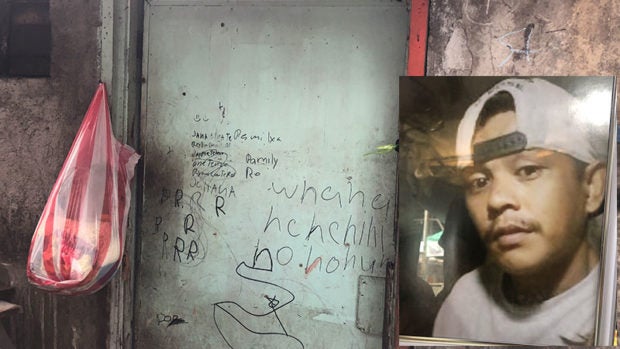 FORCED ENTRY Rhyan Cuarteros (inset) and his family were already asleep when the suspects barged inside their house. –MEG ADONIS

MANILA, Philippines — Rhyan Cuarteros met Christmas Day, not with a sumptuous noche buena with his family, followed by the opening of presents, but with the smell of gunpowder, the metallic stench of his own blood, and the terrified screams of wife as she watched him die.

The 35-year-old carpenter, despite his insistence that he was not a drug pusher, was shot twice in the darkness inside their house on R. Domingo Street in Navotas City by an unidentified man.

The suspect was accompanied by three others who acted as lookouts.

“Why did they have to do it on Christmas Day? My husband did not even have any vices. He was a good man who worked hard for his family,” said Jonalyn Tenso, Cuartero’s wife, who is a laundry woman.

On that day, she wanted to believe that the bullets were not able to pierce his body. But when she turned on the lights, she saw her husband’s blood splattered on the walls of their small house.

One of the two bullets entered Cuarteros’ heart and exited through his lungs. The other pierced his right shoulder.

The couple and their two daughters aged 11 and 5 were already asleep when a masked man barged into their house.

He grabbed Cuartero’s arm, insisted that he come with them, but Tenso held onto her husband, leading to a “tug-of-war.”

It ended when the man shot the victim before fleeing with his companions.

“Our neighbors told me he wasn’t even the target. They said it was supposed to be a man in the house next to ours,” Tenso said.

Residents in the area said the man had just been released from jail on drug charges.

The Navotas police said they were still checking this information. They had also yet to verify if Cuartero was on their drug watchlist.

JP, the couple’s eldest son, was singing karaoke with some neighbors when they heard what they thought were firecrackers.

“I didn’t even know that the man standing near us was one of the [suspects] in the crime,” JP said. “After we heard the second gunshot, we ran after him but he tried to shoot us.”

Before the couple went to sleep on Christmas Eve, Tenso said they shared a lighthearted moment. Her husband had snuck a handful of chips that she was eating.

“Hey, you’re eating most of it,” she told him. “Then he immediately returned the ”˜stolen’ food. He was always like that. He’s always the first to say sorry.”Every day, Cuartero would wake up early and eat breakfast with Tenso. They would chat until it was time for him to go to work at 7 a.m.

After spending his day at construction sites, he would tap out early to be with his family of five.

When the couple’s youngest daughter was asked what she could remember about Christmas Day, she said: “Blood.”