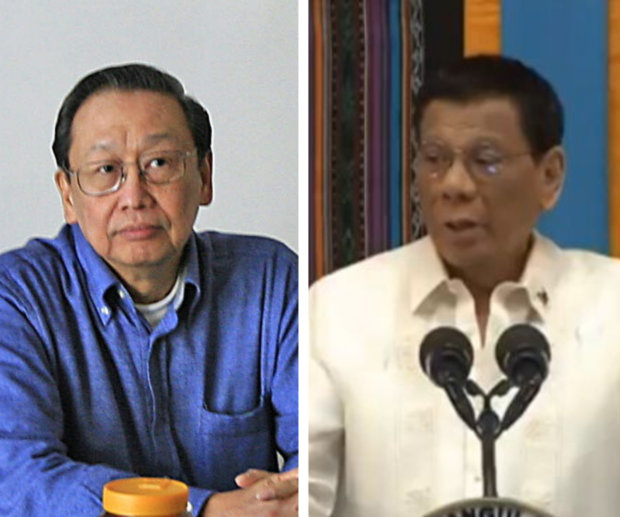 MANILA, Philippines — As the Communist Party of the Philippines (CPP) marked its 51st year of the insurgency on Thursday, December 26, group founding chairman Jose Ma. “Sison” said the administration of President Rodrigo Duterte is “going downhill to hell.”

Sison made this remark even as he and Duterte agreed to resume the peace talks a bid to end the decades-long armed conflict between state forces and the CPP’s armed wing, the New People’s Army (NPA).

“The Duterte regime is going downhill to hell and cannot find enough relief from its imperialist masters to overcome the rising revolutionary movement of the Filipino people,” Sison said in a statement posted on Facebook.

He said that since Duterte became president, he has been “obsessed” with seeking to destroy the revolutionary movement in order to please the United States and local reactionary classes.

“At first, he claimed to be ‘left’ and ‘socialist’ and pretended to be for peace negotiations. But he used these pretenses only to cover up his all-out war against the people and the revolutionary forces in the countryside and further launch in the name of rabid anti-communism the series of repressive measures, especially Proclamations Nos. 360 and 374 to Executive Order No. 70,” he said.

However, all efforts of the Duterte administration to destroy the CPP and the revolutionary mass movement have failed, which prompted the President to once again offer peace talks with the Reds, according to Sison.

He likewise hailed the CPP and the revolutionary mass movement as “invincible.”

In his statement, Sison, currently exiled in The Netherlands, also greeted his comrades on the CPP’s founding anniversary.

“I salute you for your achievements in responding to the demands of the people for revolutionary change against the rotten semi-colonial and semifeudal system dominated by foreign monopoly capitalism, domestic feudalism, and bureaucrat capitalism,” Sison told CPP members.

He said today is a time for communist insurgents to celebrate their “struggles, sacrifices, and successes,” and to examine the conditions in the country, as well as the “worsening” crisis and opportunities it presents.

“Like you, I honor most highly all the revolutionary martyrs and heroes of the CPP and the revolutionary mass movement for all their efforts and sacrifices in order to realize the accumulated and current victories in the struggle for national independence and democracy,” said the communist leader.

As CPP commemorates years of rebellion, a holiday truce has been put in place between state security forces and NPA. The cessation of hostilities started midnight of December 23, 2019, and will last until 11:59 p.m. of January 7, 2020.

But on the first day of the truce, NPA guerrillas ambushed a platoon from the Philippine Army’s 92nd Division Reconnaissance Company as they were withdrawing from Barangay Baay in Labo, Camarines Norte, in compliance with the suspension of military operations against the armed rebels. Cpl. Noel Daria was killed and six others were wounded.

Around half an hour later, suspected NPA rebels also set off an improvised explosive device along the path of personnel from the 1st Iloilo Provincial Mobile Force Company at Barangay Singon in Tubungan town. Two police officers were slightly wounded.

A tricky truce in Iloilo town: NPA claims defense in attack on cops