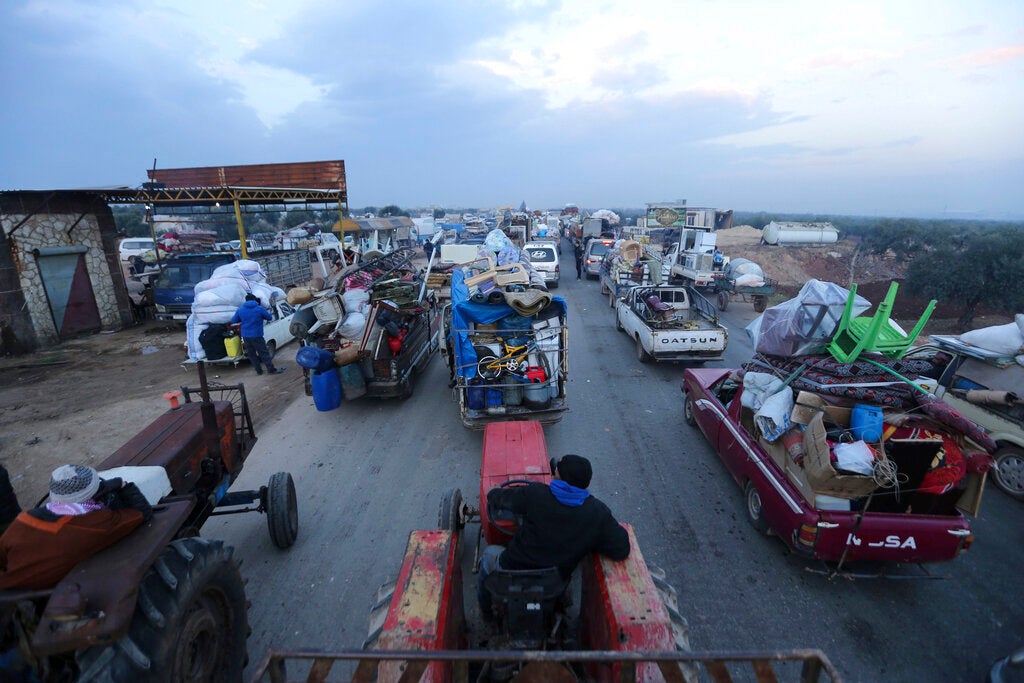 Truckloads of civilians flee a Syrian military offensive in Idlib province on the main road near Hazano, Syria on Tuesday. (AP)

BEIRUT — More than 200,000 men, women and children fled their homes in northwest Syria in buses, trucks and cars in recent weeks, amid intense air and ground bombardment by government forces, a Syrian relief group said Wednesday.

Government forces have been bombarding southern and eastern Idlib province, the last rebel stronghold in the war-torn country, since late November. A ground offensive that began last week has displaced more people and government forces have captured more than 40 villages and hamlets, according to the Syrian army and opposition activists.

The Syrian Response Coordination Group, a relief group active in northwestern Syria, said 216,632 people have fled their homes, many of them with no specific place to go. Many have been heading toward the Turkish border for safety.

The group said people fled from about 250 villages and towns, adding that 252 civilians, including 79 children have been killed as a result of the violence.

Before the ground offensive began last Thursday, the U.N. reported that some 60,000 Idlib residents had already been displaced since the government’s bombing campaign began late last month.

Videos posted online by activists and the opposition’s Syrian Civil Defense, also known as White Helmets, showed long lines of cars, trucks and buses heading north. People carried their valuables, and on most buses, bags and mattresses were loaded.

The group called on other relief agencies to help the displaced amid cold weather and heavy rain. In recent weeks, tent settlements of displaced people were flooded adding to their misery.

“We call upon the international community to pressure the regime and its allies to stop their military campaign,” it said.

Under the cover of airstrikes and heavy shelling, Syrian troops have been pushing toward a major rebel-held town, Maaret al-Numan. The town sits on a key highway linking the capital Damascus with the northern city of Aleppo, Syria’s largest.

The immediate goal of Syrian President Bashar Assad’s forces appeared to be reopening the strategic highway, which has been closed by the rebels since 2012.

Idlib province is dominated by al-Qaida-linked militants. It’s also home to 3 million civilians, and the United Nations has warned of the growing risk of a humanitarian catastrophe along the Turkish border.

ADVERTISEMENT
Read Next
‘Pahirap sa bayan’: Groups condemn CPP-NPA in Manila rally
EDITORS' PICK
10 Filipinos positive for COVID-19 in UK, 7 in Ireland — envoy
Nograles: Cabinet members to donate 75% of monthly salary to aid COVID-19 fight
Quick chat with Nicole Andersson: ‘You really don’t need much to be happy’
IATF to LGUs: Issue ordinances vs attacks on frontliners, COVID-19 patients
Diokno to Duterte: OK to make fun of buck tooth, but focus on people’s needs first
Robredo spox thanks Duterte for defending VP’s efforts vs COVID-19
MOST READ
Coronavirus hotbed Rizal to shut borders on April 6
Sotto on Isko Moreno’s call: We do our job without the media following our every move
ADB warns PH against prolonged lockdown
Gov’t mulling quarantine period extension of 15-20 more days
Don't miss out on the latest news and information.