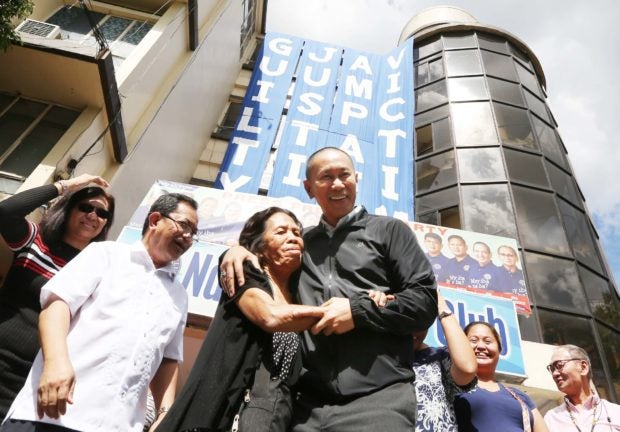 SHARED FATE A day after their historic court victory, families of the journalists killed in the 2009 Maguindanao massacre gather at the National Press Club in Manila on Friday, where they meet with Maguindanao Rep. Esmael “Toto” Mangudadatu, who lost his wife and sisters in the gruesome mass slaughter. —MARIANNE BERMUDEZ

MANILA, Philippines — In a trial that lasted nearly a decade, one witness account was key to establishing the elaborate murder plot hatched by the powerful Ampatuan clan that led to the killing of 58 people, some of whom were hurriedly buried in common graves dug by a backhoe at a hilly village in Maguindanao province, according to the court’s ruling.

The testimony of Sukarno Badal, a former vice mayor of Sultan Sabarongis town in Maguindanao who commanded a 300-strong private army of the Ampatuan family, helped a special court in deciding to convict three Ampatuan brothers and 40 other defendants in the

Badal was one of the accused who later turned into a state witness.

In separate court appearances for direct testimonies and cross examinations from Feb. 20, 2013, to Nov. 11, 2014, the prosecution’s star witness identified those who had planned and executed the “carnage,” the court documents showed.

He testified that the killings were intended to stop Esmael “Toto” Mangudadatu from running for governor in the May 2010 elections against one of the principal accused, Andal “Unsay” Ampatuan Jr.

He said the Ampatuans laid out plans to kill Mangudadatu and those who would file his candidacy papers, either in Manila, Shariff Aguak or Cotabato City.

Judge Jocelyn Solis-Reyes of the Quezon City Regional Trial Court Branch 221 said a timeline based on witness testimonies and other evidence “proves beyond reasonable doubt that there were gatherings prior to Nov. 23, 2009” of the Ampatuan clan.

“The purpose had been laid out in these meetings: to not just prevent, but kill all the persons transporting the candidacy papers of Datu Toto to Shariff Aguak. The method had also been ascertained: numerous men, firearms, checkpoints, Sanggukos [large trucks fitted with machine guns] and a backhoe would be used to accomplish the murder objective,” she said.

In one of the meetings presided by the clan patriarch, Andal Ampatuan Sr., on July 20, 2009, at the Century Park Hotel in Manila, Badal said the family and their supporters decided that Mangudadatu had to be killed because he could not be prevented from running for governor.

He said he heard Andal Jr. telling his father that “anyone who tries to take away our power must all be killed, especially those Mangudadatus.”

Andal Sr., who was one of the principal accused, died battling liver cancer in July 2015.

Badal said Andal Jr. had given him firearms days later to “implement what they had talked about in Manila.”A meeting called by Andal Sr. at the family mansion in Shariff Aguak on Nov. 16, 2009, was attended by some of their allies, commanders, lawyers and supporters.

At that meeting, Badal testified that Andal Sr. assigned people to kill Mangudadatu, depending on where he would file his certificate of candidacy.

If Mangudadatu files his certificate of candidacy in Manila, the patriarch assigned his son, Zaldy Ampatuan, a former governor of the Autonomous Region in Muslim Mindanao, and Akad Ampatuan to be in charge of the hit.

If Mangudadatu heads to Cotabato City instead, he assigned lawyer Cynthia Sayadi and Nori Unas to deal with him. He said they would take care of Mangudadatu if he were to file in Shariff Aguak since “this is my bulwark.”

Two days before the massacre, Badal quoted Andal Jr. saying that it was time to implement “the order of the Ampatuan family” to kill the Mangudadatus.

“Whoever attempts to fight them (Ampatuan family) in politics, they would be killed, especially these Mangudadatus,” Badal told the court.

He said he had warned Andal Jr. that they may end up in jail because “there would be so many people who would be killed, it’s not like salvaging (assassinating) them one by one.”

Andal Jr., however, proceeded with the plan, ordering his men to establish around five checkpoints where the Mangudadatus may pass on their way to filing his candidacy papers.

In his testimony, Badal said he was standing behind Andal Jr. who, together with several other men, shot Eden Mangudadatu, a sister of Mangudadatu, and his wife, Gigi. They were in the first “batch” of victims killed, he added.

Five other batches of victims in other vehicles in a convoy that was waylaid by the Ampatuans and their gunmen were also similarly shot, Badal said.

Badal said they were shot by the men who were like in a “contest, standing.”

“They all shot these people who did nothing wrong and so helpless,” he testified.

The passengers of the sixth and seventh vehicles, including 32 journalists, however, were able to lock themselves in. But Andal Jr. and the other men just fired through their cars, killing them, too, Badal said.

The court said Badal testified that after the killings Andal Jr. had to change his shirt because it was “full of blood.”

Even Andal Jr. had recognized the weight of Badal’s testimony and sought to reopen the trial by filing a motion to suspend the promulgation of judgment. He claimed that Badal allegedly told one of his representatives he wanted to recant his previous testimonies.

But the state witness denied the allegations and the court rejected the motion.

Reyes heard a total of 357 witnesses from both the prosecution and the defense.

The court convicted 28 principal accused of 57 counts of murder and sentenced them to 40 years in prison without parole. They included the Ampatuan brothers, Andal Jr., Zaldy and Anwar Sr.

Fifteen, mostly policemen, were sentenced to six to 10 years in prison for being accessories.

In going over testimonies and other evidence, Judge Reyes grouped the 101 accused into six classes, according to degrees of culpability or innocence.

“Those who had prior knowledge of the murder plot could either had (1) fired at the victims in Sitio Masalay; (2) performed other acts outside of Sitio Masalay; or (3) did not at all perform any overt act,” she said.

“Those who had no prior knowledge of the murder plot could either had (4) fired at the victims in Sitio Masalay; (5) performed other acts outside of Sitio Masalay; and (6) did not at all perform any overt act,” she added.

The “first class” of accused not only had prior knowledge of the murder plot but had also shot the victims. They are clearly guilty as principals by direct participation, she said.

Not at the crime scene

The “second class” were those with prior knowledge of the plot and performed other acts outside Sitio Masalay and were also also principals by direct participation.

They are Zaldy, P/CInsp. Sukarno Adil Dicay, P/Supt. Abusama Mundas Maguid, P/Supt. Bahnarin Kamaong and Anwar Ampatuan, Sr. (The police ranks mentioned above were those prior to the new designations approved by the authorities recently.)

The “third class” knew of the plot but did not perform any overt act, such as Akmad “Tato” Ampatuan and Sajid Islam Ampatuan, who were both acquitted. No one had testified that they were at the crime site on Nov. 23, 2009.

The “fourth class” included 12 people, mostly police officers and armed civilians, who had no prior knowledge of the plot but were actual assailants. The court said they were guilty as principals by direct participation.

Police officers at a checkpoint where the victims were waylaid were classified as the “fifth class” of accused with no prior knowledge of the murder plot but were still identified or had performed overt acts.

The “sixth class” of accused were those who had no prior knowledge of the murder plot and were not at the murder site. They were mostly police officers who were declared totally innocent of the crime.