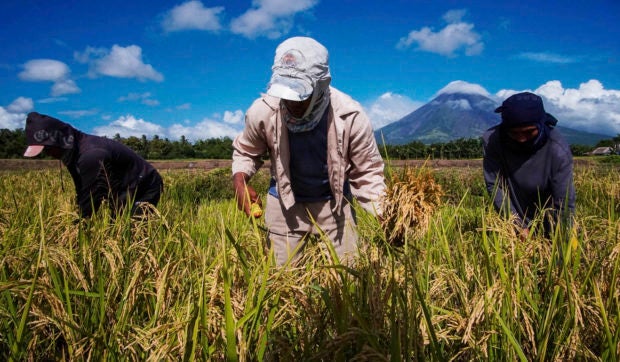 IMPACT OF ‘REFORM’ A study by the Philippine Institute for Development Studies noted that while consumers gained from the decline in retail rice prices, it “dealt a blow” to rice farmers as it pulled down farm-gate prices to record lows. —MARKALVIC ESPLANA

MANILA, Philippines — Farmers have been made “worse off” under the liberalization of rice imports, according to a new study by government think tank Philippine Institute for Development Studies (PIDS).

An ex-ante (based on assumption) analysis by the PIDS released on Wednesday said local rice producers are projected to lose an average P10 billion a year until 2030 under Republic Act No. 11203, or the Rice Tariffication Law, which was enacted in February.

The study looked at the probable long-term effects of the policy on both consumers and producers, and found that while consumers gained from the decline in retail rice prices, it pulled down farm-gate prices to record lows.

“The impact of the law differs sharply between rice consumers and rice producers along the value chain. Availability of cheap imports will tend to pull down the retail price … However, the same cheap imports allow traders to quote lower palay prices, likewise pulling down the farm-gate price. Hence, the reform has dealt a blow to rice producers… ” the PIDS said.

From March to June, the government think tank said, rice imports reached 966,690 metric tons, a four-fold jump from the volume during the same period last year of only 185,100 MT.

This caused rice prices to fall by P7 per kilogram or about 15 percent in one year. The policy helped in tempering the country’s inflation rate, and the trend has continued since postliberalization, the PIDS said.

Without liberalization, the PIDS predicted that the farm-gate price of palay could increase by 1.5 percent a year, accelerating slightly to 1.7 percent to 2030.

With liberalization, however, the buying price would only rise by 0.2 percent per year.

Palay farmers’ income was also projected to grow by 2.5 percent yearly to 2024, and would accelerate to 2.9 percent every year until 2030. But the PIDS, on the contrary, said farmers’ income is flat initially after liberalization, and a 1.8-percent reduction is expected thereafter.

“Obviously, farmers are made worse off by liberalization. On the other hand, consumers gain from the decline in retail price,” the PIDS said.

As of the fourth week of November, a kilogram of palay was being sold at an average of P15.57, down 22.34 percent from prices last year. In September, palay prices hit its lowest in eight years at P15.96 a kilo.

Similarly, rice prices during the period were between P36 to P46 a kilo depending on the variant—a continuous downtrend since the policy was implemented in March.

Despite these findings, the PIDS considered the rice tariffication law as a “propoor” policy, noting that it has cut rice spending across all income brackets except for those that produce the staple locally.

Finance Secretary Carlos Dominguez III said during the recent World Rice Congress that all these were “temporary transition challenges,” and added that, regardless, the government had been responding with decisiveness.

During his agency’s year-end press conference early this week, Agriculture Secretary William Dar said the implementation of the P10-billion Rice Competitiveness Enhancement Fund, which is designed to aid farmers’ transition to the new rice regime, has been accelerated and would continue for the next five years.

The Department of Agriculture has also instituted conditional cash transfers and loan programs, and intensified campaigns against smuggling and hoarding as well as local palay procurement.