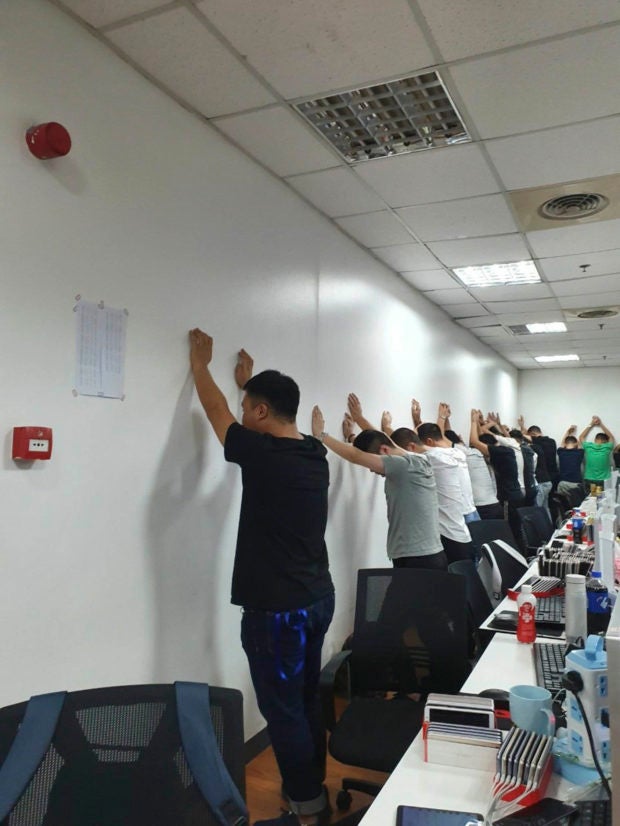 ROUNDUP The foreign workers arrested by Bureau of Immigration agents during a raid on a Quezon City office building on Thursday were found to have no proper work permits and visas.—PHOTO FROM BUREAU OF IMMIGRATION

MANILA, Philippines — A total of 342 Chinese nationals working without proper permits were arrested during a raid Thursday night at an online gaming company in Quezon City, according to the Bureau of Immigration (BI).

It was part of a crackdown on illegal immigration and an illicit gaming industry that is being fueled by mainland China’s appetite for betting.

The illegal workers were arrested at Global Trade Center Building in Bago Bantay, Quezon City, during an operation conducted by the BI Intelligence Division and the Quezon City Police District-National Capital Region Police Office (QCPD-NCRPO).They are currently detained in a temporary holding facility in Camp Caringal, pending their deportation.

“We sought the assistance of Pagcor [Philippine Amusement and Gaming Corp.] in confirming their permit, and we found out that the company was duly licensed, but was not yet allowed to operate,” Fortunato Manahan Jr., BI Intelligence Division Chief, said in a statement.

According to Manahan, the BI coordinated with the Chinese Embassy, which confirmed the company’s involvement in illegal activities, victimizing mostly their compatriots in China.

Seized during the raid were thousands of mobile phones that, the bureau suspected, were being used for online and phone scamming.

The BI said the embassy canceled the passports of the arrested Chinese.

“We will not stop until we clear our country of illegal aliens who abuse our hospitality. Follow our laws or face the consequences,” Immigration Commissioner Jaime Morente said in the statement.Licensed online gaming operations introduced in 2016 have been a boon in bringing money to the Philippine economy, but illegal businesses attracting massive numbers of Chinese migrants have also mushroomed, due largely to vested interests, corruption and weak law enforcement.

Though President Duterte has good relations with China, where gambling is prohibited, he has refused its request to ban gaming operations that cater to mainland Chinese.

Chinese gaming companies and their employees have been blamed for driving up office and residential rent, so much so that Makati City, Manila’s main business hub, has stopped issuing new licenses to gaming firms. —With reports from the wires