MUCH-AWAITED DECISION Gathered outside the Quezon City Regional Trial Court and joined by one of their lawyers, Harry Roque, families of victims of the massacre flash the victory sign after the decision on the case is read. —NIÑO JESUS ORBETA

Two leaders of the powerful Ampatuan family of Maguindanao, together with 41 other people, some also members of the warlord clan, were on Thursday found guilty of murder, a decade after they slaughtered 57 people, including 32 journalists, in the worst single instance of election violence in Philippine history.

The case had become known as the Nov. 23, 2009, Maguindanao massacre, which, because of the large number of media workers slain, also became one of the world’s single, biggest attacks on journalists.

“The court finds that the prosecution has proven beyond reasonable doubt that the killing of the 57 victims were planned prior to Nov. 23, 2009,” Reyes said in her 700-page decision read in court. “Both direct and corroborative evidence point toward this conclusion.”Reyes sentenced eight of the killers, including the Ampatuan brothers, to 40 years in prison without parole.

Fifteen, mostly policemen, were sentenced to six to 10 years in jail for being accessories to crime.

Another Ampatuan brother, Sajid Islam Ampatuan, and 56 others were acquitted on grounds of reasonable doubt.

Aside from imprisonment, the convicted were ordered to pay the families of the 57 victims P100,000 in civil indemnity and P100,000 in moral damages. In addition, they were ordered to pay the heirs P560,000 to over P23 million for loss of earning capacity, as most of the victims were breadwinners.The biggest amount, P23.13 million, was ordered paid to the heirs of slain journalist Jephone Cadadagaon.

Defense lawyers said they would appeal the convictions.

There were roughly 100 defendants who were sentenced on Thursday. A principal accused, former Maguindanao Gov. Andal Ampatuan Sr., patriarch of the clan, died in jail in 2015.

Others ordered arrestedEighty other accused remain at large, and Judge Reyes ordered the Philippine National Police to arrest them.Following the order, Lt. Gen. Archie Gamboa, the acting PNP chief, directed the PNP Criminal Investigation and Detection Group and the Bangsamoro Autonomous Region in Muslim Mindanao police to launch a manhunt for the “fugitives,” who, he said, were considered “armed and dangerous.”

The Maguindanao massacre had cast a spotlight on the Philippines’ notorious culture of impunity, in which powerful and wealthy politicians and businessmen often operate above the law.

The Ampatuans ruled the impoverished province of Maguindanao and were allowed to build a heavily armed militia by then President Gloria Macapagal-Arroyo to serve as a buffer against a long-running Moro insurgency in the region.

Prosecutors said members of the family and their associates carried out the attack in broad daylight on a convoy carrying the wife of Andal Ampatuan Jr.’s rival for the Maguindanao capitol, relatives, lawyers and the journalists. The group was traveling to Shariff Aguak to register the gubernatorial candidacy of the challenger, Esmael Mangudadatu, when it was stopped at a police-manned checkpoint, its members ordered out and driven at gunpoint to a rise above the road, killed in a hail of gunfire, and then dumped in pits that had been dug using an excavator.

Arroyo declared a state of emergency in Maguindanao the day after the massacre, then placed the province under martial the following month to speed up the arrest of the killers.With scores of witnesses and mountains of legal paperwork, the case had creaked through a Philippine justice system well known for being overburdened, underfunded and vulnerable to pressure from the powerful.

Victims’ families had endured the trial of more than a hundred defendants marred by allegations of bribery, defense delays, the murder of several witnesses, and a fear that the still powerful accused could be acquitted.

“Justice is alive” in the Philippines, Mangudadatu, now holding the seat of Maguindanao’s second district in the House of Representatives, declared after the conclusion of the case on Thursday.

“This event is clear proof that justice in our country is truly alive, and that we will never err when we choose right from wrong, and faith in God and our Constitution,” he said in a statement.Mangudadatu said that while the decision was tainted by the acquittal of some of the accused, his family was gratified that the principal suspects had been meted out lifelong prison terms.

“My children, siblings, relatives and myself, as well as all the orphaned families, wish to thank the Filipino people for [their] endless prayers and expressions of support so that we may attain the justice that we have been longing for [in] the last 10 years,” he said.

“The fact that justice tipped to our side makes the 10-year wait all worth it,” he added. 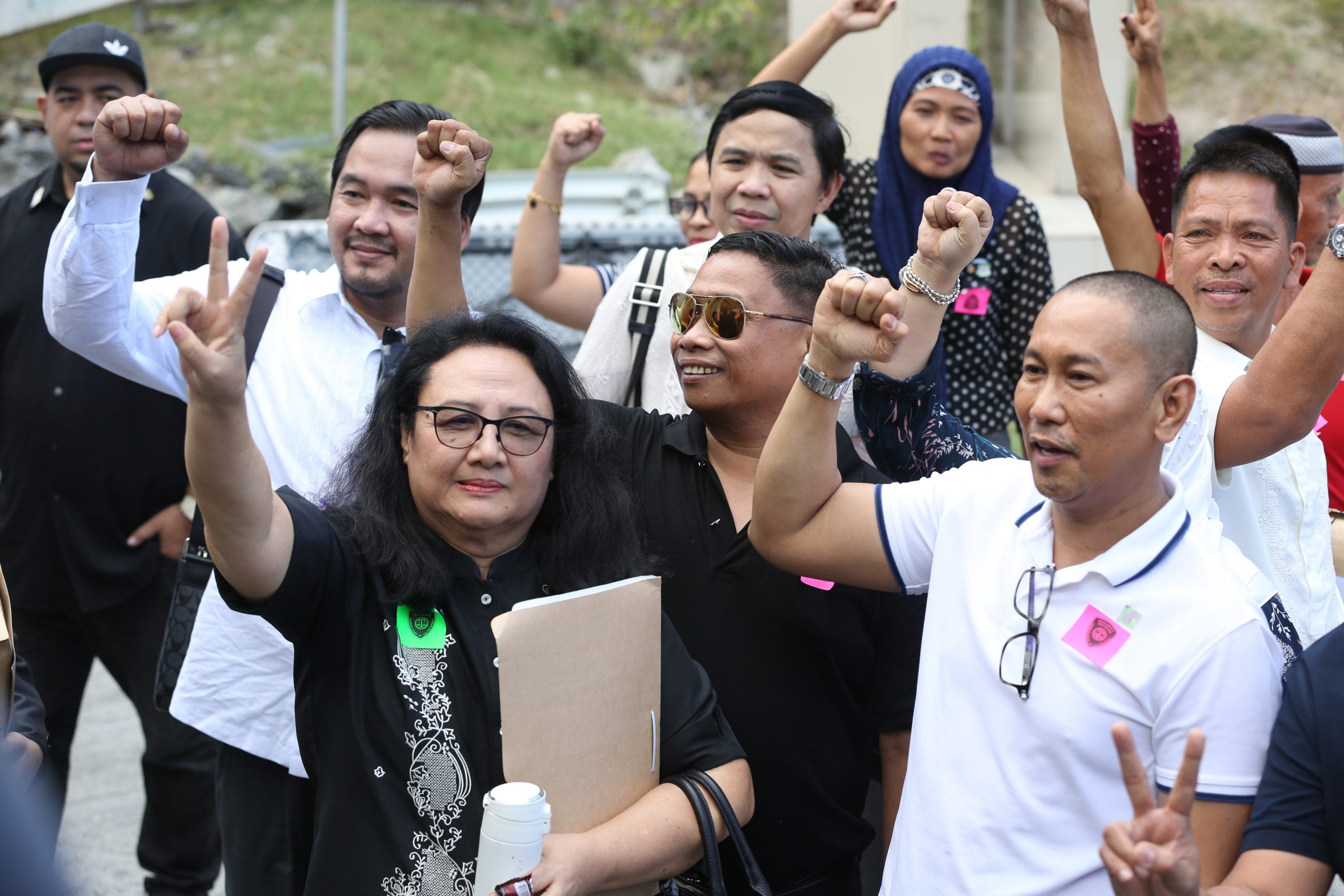 Judge Reyes and the lawyers decided to read only the dispositive part of the decision, agreeing that the 700-page document could take an entire day to read.

In her decision, she noted that Andal Ampatuan Jr. and other members of the clan were identified by witnesses as having knowledge of the murder plot and had participated in the actual attack on the victims.

The court also considered the eyewitness account of Sukarno Badal that showed some of the accused actively participated in the plot to stop Mangudadatu from running for governor of Maguindanao, even if they had to kill him, so that the Ampatuans could continue ruling the province.

It noted that the defense failed to refute the direct evidence proving that a meeting to plan the attack was held on the evening of July 20, 2009, at Century Park Hotel in Manila.

“There is no gainsaying therefore that the 57 victims in these cases were indeed killed in the hilly portion of Sitio Masalay, Barangay Salman, Ampatuan, Maguindanao, on that fateful day,” Reyes said.

There were originally 58 victims, but the court dismissed the case involving journalist Reynaldo Momay because his body was never found.

In General Santos City, some 100 family members of the slain media workers gathered at the St. Paul of the Cross Novitiate for a morning prayer service before watching the live feed from Camp Bagong Diwa.

“There was strong evidence against the principal accused Ampatuans yet it still took this long for justice to be rendered,” said June Colleen Maravilla, 24, who lost her father, Bart, a Bombo Radyo reporter, in the massacre.

After the promulgation, prosecution lawyers briefly celebrated with the victims’ families, some of whom had been waiting in a tent near the courthouse.

“It’s a partial victory for majority of the [families], but I’m not happy with the acquittal of Sajid and Akmad Tato (Ampatuan),” said Nena Santos, who represented 38 families.

“But in general, we’re happy with the decision. We respect the decision of the judge. There’s an automatic appeal [to the Supreme Court] and that could be harder,” she said.

Sajid Islam Ampatuan, who was out on bail before the promulgation, did not show up in court.

Judge Reyes gave him five days to explain his absence or she would cite him for contempt. —WITH REPORTS FROM JEANNETTE I. ANDRADE, MELVIN GASCON, BONG S. SARMIENTO, MATTHEW REYSIO-CRUZ AND AFP