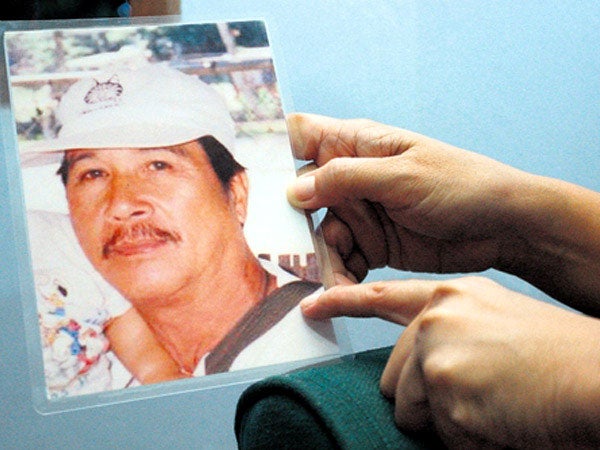 Reynafe Momay-Castillo points to a picture of her father, Reynaldo Momay, a photographer for Midland Review. The grandchildren of Reynaldo, have learned to love their pet dog “Unsay” even though it is the nickname of the principal suspect in the grisly mass murder that snuffed out the life of their grandfather and 57 others. JEOFFREY MAITEM/INQUIRER MINDANAO

MANILA, Philippines — The Quezon City Regional Trial Court Branch 221 has acquitted all the accused, including Datu Andal Ampatuan Jr. and the rest of the Ampatuan clan, for the death of photojournalist Reynaldo “Bebot” Momay, whose body was never found in the crime scene.

Momay was supposed to be the 58th victim killed during the massacre perpetrated by the Ampatuan clan on November 23, 2009.

Only an identification card was found at the murder scene. The murder case for his death was filed only in 2012 after dentures that were recovered from the mass grave were confirmed to be his.

In clearing all the accused in the case of Momay, the court said: “Mere  allegation and speculation is not evidence, and is not equivalent to proof.”

Momay was confirmed to have boarded one of the vans in the ill-fated convoy but whose body was never recovered.

“Regrettably, the court is not convinced. For a testimony to be credited, the testimony should not only come from the mouth of a credible witness, it  should  likewise  be  credible  and  reasonable  in  itself. It  must  be consistent with human experience, and occurring in the normal course of things,” Reyes said of the testimony offered by the prosecution in Momay’s case.

The piece of dentures, recovered by investigators from the Commission on Human Rights (CHR) and the Scene of the Crime Operatives (SOCO) more than a week after the incident was offered by the prosecution with the newsman’s common law wife positively identifying the same as belonging  to Momay.

“The court finds that the probative value of the denture does not lead to the aforesaid conclusions. First, the prosecution unsuccessfully established that the denture belonged to Momay,” the court said.

To prove that the denture was that of Momay, the prosecution has presented his live-in partner, Marivic Bilbao who said that she cleaned the denture everyday for six (6) years since 2003. The court, however, dismissed it as  an implausible narrative.

“Who would ever clean everyday the denture of a loved one or live-in partner when the latter is not physically incapable of cleaning it himself/herself?  Is it a normal human behavior?  The court can only surmise that Bilbao resorted to this kind of narration in order to convince it of her ability to identify said denture as belonging to Momay,” the court said.

The prosecution presented other witnesses but the court said it “only established with moral certainty that after having been sighted with the convoy of journalists en route Shariff Aguak with Mangudadatus, Reynaldo Momay could no longer be found after 10 am.”

The court said there is no certainty if Momay died or went missing because there is no evidence of actual death.

It stressed on the importance of the “corpus delicti”or the body of the crime in prosecuting crimes such as murder or in some cases, if there is no body, at least other evidence to prove that the offense has been committed such testimonies that Momay was indeed among the journalists who joined the convoy and not one seen riding a van for the convoy or hearing Momay’s voice while the witness was talking on the phone.

“No one had testified to this effect,” said the court.

The court also dismissed the claim for damages of the heirs of Momay.