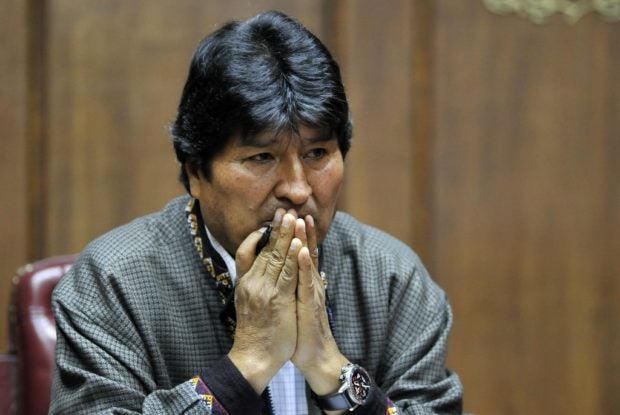 In this file picture taken on November 27, 2019 Bolivia’s exiled ex-President Evo Morales gestures as he delivers a speech at the Mexican Journalists Club, in Mexico City, on November 27, 2019. Bolivia’s attorney general’s office ordered the arrest of the exiled former president on December 18, 2019 following the interim government’s accusation of sedition and terrorism. AFP

Public prosecutors in La Paz signed a warrant for police to detain the 60-year-old — who is in Argentina — and take him to the attorney general’s office.

The former trade union leader denounced the arrest order as “illegal, unfair and unconstitutional” on Twitter.

“I’m not worried. As long as I’m alive I’ll continue with greater strength in the political and ideological struggle for a free and sovereign Bolivia,” he said.

He initially received asylum in Mexico and then arrived in Argentina last week.

The allegations against him stem from an audio recording released by Arturo Murillo, the interim government’s interior minister. In the recording, Morales allegedly tells one of his supporters to block trucks and interrupt the food supply to several cities.

Morales was in Mexico at the time, the complaint alleges.

Murillo began legal action against Morales in November, after weeks of road blocks caused food and fuel shortages in the capital La Paz following his resignation.

The ex-president countered by accusing the interim government of manufacturing the audio to damage him politically.

The controversial October poll in which Morales was re-elected was annulled following an Organization of American States (OAS) audit that found clear evidence of vote rigging.

Right-wing deputy senate leader Jeanine Anez took over as interim president and has vowed to call new elections early next year, although no date has been set.

The interim government has barred Morales from standing in the ballot.

Bolivia’s constitution limits a president to two consecutive terms but Morales stood for a potential fourth term in October.

Ahead of the last two elections, the constitutional court — filled with Morales loyalists — made controversial decisions authorizing him to run again.

His detractors accused him of corruption and authoritarianism.

Speaking from Buenos Aires on Tuesday, Morales pledged to back another candidate from his Movement for Socialism party this time around.

“I’m convinced that we’ll win the next elections. I won’t be a candidate but I have a right to be in politics,” Morales told reporters.

Previously he insisted he’d been the victim of a coup and has launched near-daily Twitter attacks against Anez and her allies.

Earlier on Wednesday he claimed US President Donald Trump — who hit out against Morales on Tuesday for provoking violence in Bolivia from afar —  was behind the “coup.”