BARCELONA, Spain – Riot police clashed with protesters in the streets Wednesday night outside a soccer match between Barcelona and Real Madrid, as authorities sought to keep Catalonia’s separatist movement from disrupting the game viewed by 650 million people worldwide. 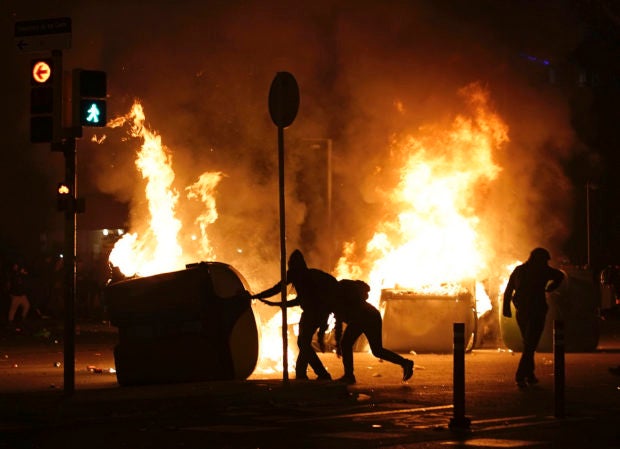 People set fires in garbage containers after a Catalan pro-independence protest outside the Camp Nou stadium ahead of a Spanish La Liga soccer match between Barcelona and Real Madrid in Barcelona, Spain, Wednesday, Dec. 18, 2019. Thousands of Catalan separatists are planning to protest around and inside Barcelona’s Camp Nou Stadium during Wednesday’s match against fierce rival Real Madrid. (AP Photo/Felipe Dana)

The match in Barcelona’s Camp Nou stadium began without incident and was halted only briefly when some fans threw balls onto the field bearing a message for the Spanish government to open a dialogue with the separatists.

The game, which drew nearly 100,000 spectators, ended in a scoreless draw.

Thousands of police and private security guards were deployed in and around stadium.

In the street clashes, riot police used batons to force the crowd back, some threw objects at officers lined up behind shields and other protesters fought among themselves. Authorities said nine people had been arrested, and Spain’s national news agency Efe reported that 12 were injured.

At least four plastic trash cans were set on fire, and a smell of smoke wafted into the Camp Nou.

When the game ended, fans were directed to leave on the stadium’s south side to avoid the clashes outside.

The separatists sought to promote their independence bid by using the media coverage of the game between Barcelona, the Spanish league leader, and its fierce rival Real Madrid. Known as El Clásico, the game was postponed from Oct. 26 amid violent protests by the separatists.

As crowds entered Europe’s largest soccer stadium Wednesday night, security guards confiscated masks of Barcelona’s Argentine star Lionel Messi from supporters, apparently to ensure they could be identified on closed-circuit cameras if they broke the law.

As the game began, some fans held up blue signs saying ‘Spain, Sit and Talk” and “FREEDOM.” Others chanted, in Catalan, “Freedom for the Political Prisoners.” Those messages referred to the Spanish government’s refusal to discuss the wealthy northeastern region’s independence, as well as the recent imprisonment of nine of the movement’s leaders convicted for their roles in a failed 2017 secession bid.

A shadowy online group called Tsunami Democratic, which was behind the protest, had posted a message on social media saying: “Hello, world! Tonight Tsunami has a message for you.”

Protest organizers said over 25,000 people signed up to demonstrate near the stadium in Barcelona, Catalonia’s capital, although it was hard to distinguish between protesters and fans.

There was a festive atmosphere before the game, though some protesters briefly blocked main roads to the stadium.

The Barcelona team asked its fans to behave with civility and not to affect the match.

Francisco Sánchez, a 60-year-old mechanic, was outside Camp Nou hours before the match. He did not have a ticket, but was one of several protesters who distributed small blue banners with the message urging Spain to begin a dialogue.

“I hope this movement will make our leaders realize that they have to lay off the law and start taking,” he said. “This can’t be solved with violence, but through words.”

Miguel Ángel Giménez, a 42-year-old policeman in a Barcelona shirt and scarf, drove with a friend over 700 kilometers (430 miles) from the southern region of Murcia to attend the match.

“Our friends back home told us we were crazy to cross half of Spain to go to a game that might not be played,” he said, adding that “everything is quite calm. There is lots of security.”

The U.S. Consulate in Barcelona advised people to avoid the area or use caution if near it.

Henrik Noerrelund, a 55-year-old electrician from Denmark, flew in with his wife to attend his first Barcelona match after a lifetime supporting the club.

“In my parts, they used to say politics and football don´t mix, but today you have to accept it,” Noerrelund said. “It’s there, you cannot separate it, you have seen it for many years, and I don’t think they can manage to separate it and just play football.”

Separatist sentiment grew sharply in Catalonia during the global recession that hit Spain hard. The 7.5 million residents of Catalonia are about equally divided by the secession question, according to polls and election results.

Separatists have used the Camp Nou stadium as a protest platform for years. They shout “Independence!” at a set time during matches and sometimes unfurl banners.

The Barcelona team has walked a fine line between supporting its fans’ right to free expression and aligning itself with the greater interests of Catalonia. Many feel it does not fully support secession so as not to anger its Catalan fans who are not separatists or its millions of supporters across Spain.

With its slogan “More than a club,” it presents itself as a Catalan institution, aligned with the region’s proud cultural traditions and language, which is spoken along with Spanish in the semi-autonomous region.

Its rivalry with Real Madrid has a decades-old political undercurrent, with many Catalans seeing the capital’s team as a symbol of domineering, central power and a hallmark of Spanish unity and authority.

Madrid supporters, in turn, see Barcelona as representing a traitorous region that wants to break up Spain. For many years, some Barcelona fans held up a massive banner at games that read “Catalonia is not Spain.”

Security is always high whenever they play — just like at many soccer matches between fierce rivals — but there is no history of violence at the games.

Tsunami Democratic carried out its first major action in October when it organized a large protest after several of the secession movement’s leaders were sentenced to jail for their role in a failed secession bid in 2017.

A call by Tsunami Democratic led to thousands of angry protesters gathering at Barcelona’s airpor t. A street battle broke out between the most radical protesters and police inside and outside the terminal, and about 150 flights were canceled as ground transport was halted for hours. Protests by separatists left more than 500 people injured, half of them police.