In a first, Peruvian with Down syndrome runs for parliament | Inquirer News
Close
menu
search

In a first, Peruvian with Down syndrome runs for parliament

LIMA, Peru  – Bryan Russell has Down syndrome and does daily speech exercises, putting pens and corks in his mouth to help build up low muscle tone there. He is also waging a longshot bid to become a national Peruvian lawmaker, going door to door in Lima to ask for votes. 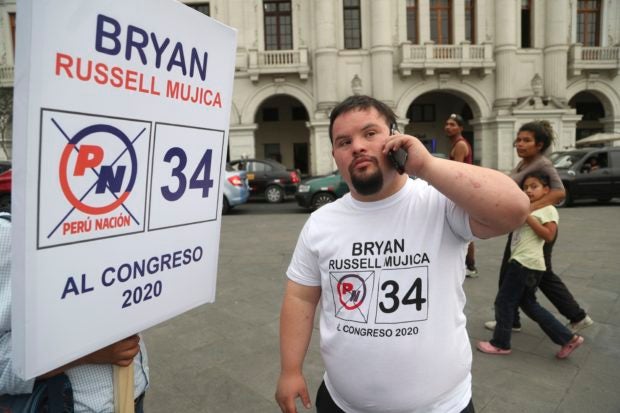 In this Dec. 13, 2019 photo, Bryan Russell takes a call as he campaigns for Congress in Lima, Peru. Russell is the first person with Down syndrome to run for public office, according to the Global Down Syndrome Foundation. (AP Photo/Martin Mejia)

Russell, 27, wants to use his campaign to raise awareness about people with developmental disabilities and he says he represents an alternative to the scourge of corruption in Peru that has brought down presidents and weakened democratic institutions.

“I’m someone clean, honest, transparent,” Russell said in an interview with The Associated Press. He spoke while sitting next to Amor, a pet dog he rescued from the street.

The purpose of politicking, he said, is to “break the paradigm” that people with Down syndrome can’t be independent.

Russell may be the first person with Down syndrome to run for public office anywhere, according to the Global Down Syndrome Foundation.

“We are thrilled that Bryan Russell is running for Congress in Peru,” said Michelle Sie Whitten, president and CEO of the foundation. “As far as we know, he is the first professional who has Down syndrome running for a publicly elected office, and he is showing the world that we need diversity in all areas of society including in our governments.”

In 2013, Ángela Bachiller, who has Down syndrome, became a city councilor in Valladolid, Spain. But she didn’t run for election, instead taking over the post after her predecessor resigned because of corruption allegations.

Down syndrome is a genetic abnormality that causes developmental delays and medical conditions such as heart defects and respiratory and hearing problems.

Russell is a candidate for Peru-Nacion, a center-right party that is not widely known and has fared poorly in past elections. However, Russell’s bold campaign ahead of the Jan. 26 parliamentary elections is getting attention. He was invited to speak at a leftist forum where he asked people to fight for people like him, regardless of political leanings.

“I want people with my condition to have a voice,” said Russell, who studied communications at the Peruvian San Ignacio de Loyola University and said his parents encouraged him to find his own way.

“I learned how to read and write, walk, run and eat, basically to respect myself,” the candidate has written.

“Well this is really impressive, because Bryan is changing the history and that is the most important thing,” said Gladys Mujica, Russell’s mother.

Mujica, an English teacher, described her son as a “symbol.”

Some Peruvians are open to Russell’s campaigning, which consists on a normal day of handing out leaflets while carrying a sign with an image of his face.

“He’s looking to do his best. The ‘normal’ people try to steal from the country. That’s a very big difference,” said Carlos Maza, a retired man who said he would vote for Russell.

“We have to give him a chance,” said Elena Saavedra, a secretary who shook the candidate’s hand.

About 3 million Peruvians have some kind of disability in a country of more than 30 million, according to official figures. There is no data for the number of Peruvians with Down syndrome, though historian Liliana Peñaherrera, founder of the Peruvian Society for Down Syndrome, estimates there could be up to 25,000 people with the condition.

People with Down syndrome struggle to overcome prejudices, including a perception that they are basically big children and can’t make their own decisions, said psychologist Patricia Andrade.

As a result, many with Down Syndrome live on the margins of society because employers prefer to hire people with other kinds of disabilities, filling a quota of 3% and 5% in workplaces of more than 50 people.

Last year, Peru changed its laws to allow people described as disabled to exercise their rights without the intervention of a representative on their behalf. Previously, they needed a guardian to marry, vote, sign a work contract, acquire a credit card and do other things.

Peñaherrera welcomed Russell’s political candidacy, saying it draws attention to people who struggle against discrimination and the invisibility that society forces upon them.

Still, she said, Russell should be held to the same standards as “any other politician” if he gets elected.