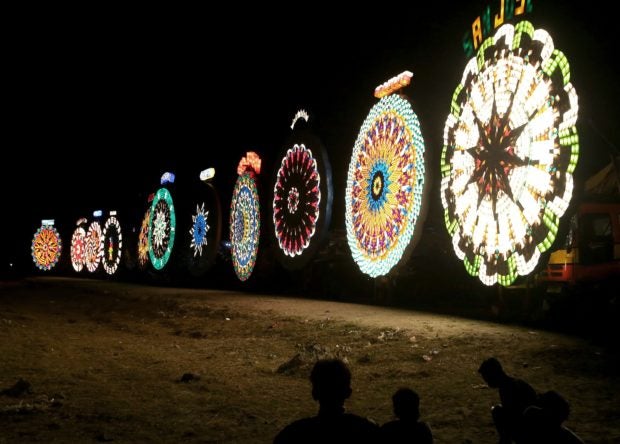 CITY OF SAN FERNANDO, Pampanga, Philippines — The entry of Barangay Sta. Lucia won the grand prize in the Giant Lantern Festival 2019 on Saturday here, ending a five-year winning drought for the village where the tradition began 111 years ago.

The village clinched the top slot because its maker, Byron Bondoc, put in a gimmick that wowed foreign and local judges as well as the audience.

Held as a well-guarded secret before the competition began, the lantern’s “tambor” (center) opened like a twin door, revealing what appeared like a glass-stained window with an image of the Holy Family in Nativity scene.

Like its 11 competitors, the Sta. Lucia lantern steered clear of a theme with social issues like it did on the Marawi siege and President Duterte’s war on illegal drugs.

It simply beamed the messages “Peace on Earth” and “Family is Love” during the three rounds of the contest locally called “ligligan parul.”

“We are sustaining the tradition of making giant lanterns because it is a cultural heritage that defines us Kapampangans,” Mayor Edwin Santiago told the crowd estimated at more than 50,000.

“Creativity, patience and being full of hope are traits we have as Kapampangans, as seen in these lanterns. In the entire world, only us make lanterns as big as these,” Gov. Dennis Pineda said of the 20-foot creations.

Byron, 36, is one of the five sons of Alberto “Toto” Bondoc, a nephew of Ernesto Quiwa, great-grandson of the pioneer, Francisco Estanislao, who enlarged the lantern in honor of the village’s patron, St. Lucy, in 1908.

Alberto trained under Ernesto, the oldest living lantern maker to date. Byron competed against his brother, Engelbert, who made the Sto. Nino entry.

But the gimmick was not really new, according to Roland Quiambao, a protégé of Susing Maglalang, another pillar of the craft.

Ernesto also opened the tambor in the 1960s and Arnel Flores, in 2000, Quiambao recalled.

Byron’s lantern featured the traditional parts: the “siku-siku” (the set of triangles surrounding the inner circle), “palimbon” (the designs that encircle the two levels) and the “puntetas” (the final outer circle). 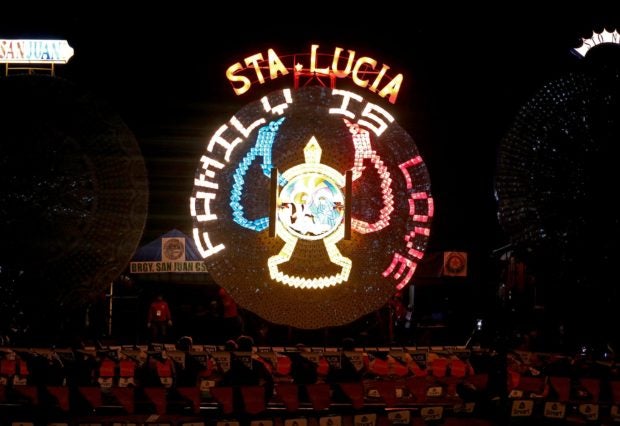 WINNING PIECE Flashing the message “Family is Love” that is accompanied by colorful lights, the entry of Barangay Sta. Lucia was adjudged champion in this year’s competition. —RICHARD REYES

Several rotor, or aluminum barrels that connect the bulbs and wires to the source of the electricity through hair pins or bicycle rods, enabled his team to let numerous patterns of colors and designs that turned on and off to be in sync with a medley of songs.

For its latest win, the village earned a P150,000 cash prize, which was just a fourth of the cost of mounting the lantern. Byron and his team worked four months to earn for Sta. Lucia the bragging rights to have made the most beautiful lantern.

The festival organizers also gave a citation to businessman Levi Laus who supported the annual event until his passing on April 25 this year.

They also recognized Cresenciano Valencia, an electrician who invented the rotor in the 1950s to replace the “kalakate,” a copper rod that was struck to another metal connected to a source of electricity.