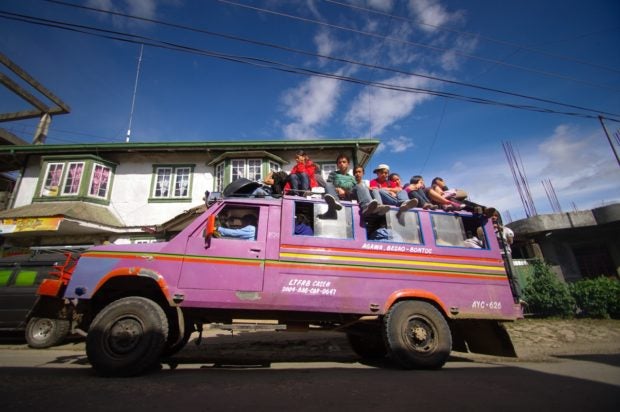 OVERLOADED Children and young adults make themselves comfortable on top of a public jeepney as they travel to a nearby town in Mountain Province. —RICHARD BALONGLONG

BAGUIO CITY, Philippines — Public utility vehicles may no longer ferry rooftop passengers in the Cordillera, a practice borne out of necessity due to inadequate transport systems, according to officials of the Department of Transportation (DOTr).

But the Inter-Agency Council for Traffic (I-ACT) tasked with enforcing that rule said a crackdown on traveling via “topload” would need a careful study.

Topload travel is when people sit beside bags atop jeepneys or buses. It has been a practice for decades because of few public utility vehicles (PUVs) serving interior communities in the region.

Some tourists consider topload travel as part of their “experience” when visiting Cordillera towns. Most PUVs here take narrow, and occasionally unpaved roads, that zigzag up and down the mountain terrain.The government wants that practice to end due to the safety concerns, said I-ACT chair and Transportation Assistant Secretary Manuel Gonzales. The practice is technically “overloading,” he said, and may also violate the law banning hitchhiking.

The I-ACT officials said the government needed to reduce the number of road accidents, particularly involving vehicles that carry too many passengers.

As of 2018, road accidents claimed more than 11,000 lives nationwide. Some of the victims were groups ferried in dump trucks, after big rural events or festivals.

According to I-ACT officials, they are still discussing how and when that prohibition would be enforced in Cordillera with the PUV scarcity for a population of 1.72 million as of the 2015 census.

Most of these vehicles were concentrated in Baguio and Benguet.In other regions, I-ACT checkpoints stop overloaded vehicles and ask passengers to disembark, Espino said. In some cases, I-ACT teams have standby vehicles to ferry them to their destinations, or escort the erring vehicles to a public area where the passengers could transfer to PUVs, he said.

However, stopping topload passengers in remote Cordillera communities may not be possible, particularly for students headed for schools, Espino said, until the government issues more transport franchises for the region’s “underserved routes.”

Jeepneys have been rebuilt and designed for rough mountain roads as far back as the 1970s.DOTr officials said the agency must also resolve issues aired by Cordillera PUV operators, who have not yet replaced their old jeepneys and buses with environmentally friendly vehicles.

None of the PUV franchise holders here have consolidated their fleets into a transport cooperative so they can afford replacement vehicles, said Francis Almora, Cordillera director of the Land Transportation Office.

Part of the apprehension was that the new jeeps in the market are not suited for the mountain terrain, he said, citing a 32-seat PUV now serving parts of Central Luzon, which could not navigate through Baguio’s narrow streets.

Some of electric jeepneys offered to the region were also unable to cope with the steep roads, he added.