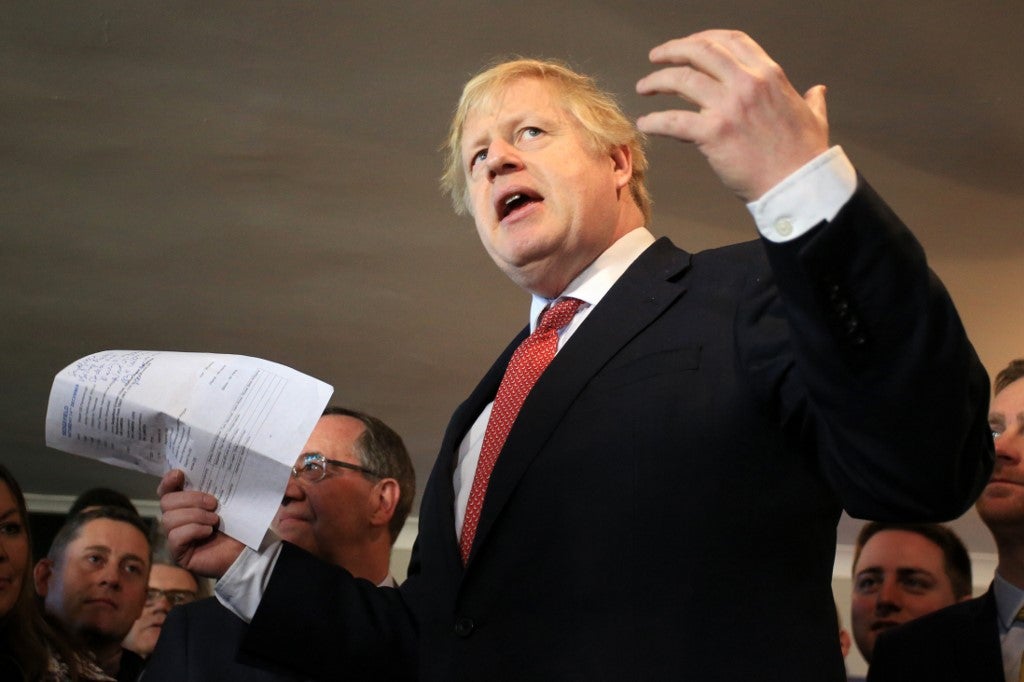 Britain’s Prime Minister Boris Johnson gestures as he speaks to supporters on a visit to meet newly elected Conservative party MP for Sedgefield, Paul Howell at Sedgefield Cricket Club in County Durham, north east England on December 14, 2019, following his Conservative party’s general election victory. – Prime Minister Boris Johnson called on Britons to put years of bitter divisions over the country’s EU membership behind them as he vowed to use his resounding election victory to finally deliver Brexit next month. (Photo by Lindsey Parnaby / POOL / AFP)

LONDON, United Kingdom — Prime Minister Boris Johnson vowed Saturday to repay the trust of former opposition voters who gave his Conservatives a mandate to take Britain out of the European Union next month.

Johnson toured a leftist bastion once represented by former Labour leader Tony Blair in a bid to show his intent to unite the country after years of divisions over Brexit.

The northeastern region fell to the Tories in a general election Thursday that turned into a re-run of the 2016 EU membership referendum in which Johnson championed the Brexit cause.

Johnson told cheering campaigners that he understood how difficult it was for traditional Labour voters to switch sides and back his right-wing government.

“I can imagine people’s pencils hovering over the ballot paper and wavering before coming down for us and the Conservatives,” he said.

“And I want the people of the northeast to know that we in the Conservative party — and I — will repay your trust.”

The working class north of England dropped its longstanding support for Labour and relegated the century-old party to its worst finish since before World War II.

Johnson now commands an 80-vote majority in the 650-seat House of Commons — a margin last enjoyed by the late Tory icon Margaret Thatcher in the 1980s.

The lead assures Johnson safe passage of his divorce deal with the European Union when he re-submits it to parliament next week.

This would pave the way for Britain’s formal withdrawal from the other 27 EU nations by the January 31 deadline set by Brussels.

The sides would then set off on the tricky task of trying to reach a brand new comprehensive trade agreement by the end of 2020.

Failure to meet that deadline — which Johnson has repeatedly promised not to extend — would have unknown repercussions for global markets and economic growth.

But Johnson said his government’s main focus after the first stage of Brexit was completed would be on bread-and-butter issues important to Labour voters.

“It is getting Brexit done but it is also delivering on our National Health Service, our education, safer streets, better hospitals, a better future for our country,” he said.

“We are going to recover our national self-confidence, our mojo, our self-belief.”

The snap general election redrew the political map of Britain and left Brexit opponents in disarray.

“Frankly, it’s pie in the sky to keep talking about fighting on,” pro-EU campaigner Michael Heseltine — a prominent former Tory cabinet member who is now a peer in the House of Lords — told Sky News.

Labour’s campaign was dogged by voter doubts about its vague position on Brexit and allegations of anti-Semitism within the party’s senior ranks.

Polls showed a part of the problem also rested with Labour leader Jeremy Corbyn — a veteran socialist who suffered from historically low approval ratings for much of the past year.

Corbyn promised to step down after a period of “reflection” about the party’s course.

One of Corbyn’s most trusted allies, John McDonnell, said on Saturday he was also quitting — and that it may be time for the entire leadership team to clear out.

“I won’t be part of the shadow cabinet. I’ve done my bit,” Labour finance spokesman McDonnell told the BBC. “We need to move on.”

“Labour has become the nasty party,” lawmaker Margaret Hodge said. “I am one of the victims of that with the anti-Semitism.”

Read Next
‘Amihan’ to bring cloudy skies over some Luzon areas — Pagasa
EDITORS' PICK
Get exciting deals and discounts when you download the new McDonald’s App
‘House of Kobe’ launched in Valenzuela City hours before hoops star’s death
In appreciation: Kobe Bryant, a life defined by hard work
4 Ways Jollibee’s new store will serve a leveled-up kind of joy to Filipinos in the South
SM continues to send relief assistance to remote towns in Batangas
DOH warns vs eating raw meat, exotic animals amid coronavirus outbreak
MOST READ
College baseball coach, wife and daughter die in crash that killed Kobe
Kobe Bryant’s daughter Gianna also killed in crash
Kobe Bryant’s helicopter flew in fog that grounded other choppers
Hunt out for man caught ‘defecating’ in Intramuros
Don't miss out on the latest news and information.