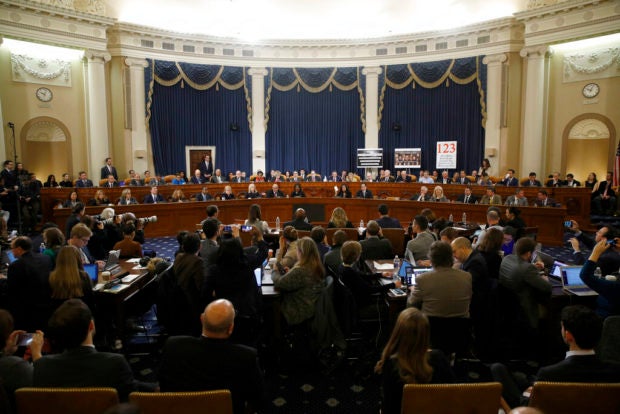 Member of the committee work during a House Judiciary Committee markup of the articles of impeachment against President Donald Trump, Friday, Dec. 13, 2019, on Capitol Hill in Washington. Trump impeachment goes to full House after Judiciary panel approves charges of abuse of power, obstruction of Congress. (AP Photo/Patrick Semansky, Pool)

The House is expected to take up the two articles of impeachment next week.

The abuse of power charge stems from Trump’s July phone call with the Ukraine president pressuring him to announce an investigation of Democrats as he was withholding US aid. The obstruction charge involves Trump’s blocking of House efforts to investigate his actions. Trump has denied wrongdoing.

The vote in the House panel was split along party lines, with 23 Democrats voting in favor and 17 Republicans opposed.

Trump is accused, in the first article, of abusing his presidential power by asking Ukraine to investigate his 2020 rival Joe Biden while holding military aid as leverage, and, in the second, of obstructing Congress by blocking the House’s efforts to probe his actions.

Voting came quickly after two days of hearings at the Capitol and a rancorous 14-hour session that was abruptly shut down late Thursday when the Democratic majority refused to be forced, after a long and bitter slog through failed Republican amendments aimed at killing the impeachment charges, into midnight voting. Instead, the impeachment charges against Trump were aired in full view of Americans.

Chairman Jerrold Nadler, D-N.Y., who had said he wanted lawmakers to “search their consciences” before casting their votes, gaveled in the landmark morning session.

Trump took to Twitter early Friday to praise the panel’s Republicans, saying “they were fantastic yesterday.”

“The Dems have no case at all, but the unity & sheer brilliance of these Republican warriors, all of them, was a beautiful sight to see,” he tweeted. “Dems had no answers and wanted out!”

ADVERTISEMENT
Read Next
Duterte, Misuari meet anew in Davao; push for peace in Mindanao
EDITORS' PICK
PH preps for China virus: Question of when, not if
Beyond water service: Maynilad builds massive infrastructure projects to clean up Metro Manila waterways
Museums ‘put to sleep,’ churches closed amid volcano’s unrest
Seventh judge assigned to handle De Lima case
SM continues to send relief assistance to remote towns in Batangas
Get exciting deals and discounts when you download the new McDonald’s App
MOST READ
Taal Volcano flexes signs of restiveness anew
Passengers from Wuhan, China to be flown out of Kalibo, Aklan – CAAP
Part of Aurora Boulevard in Cubao closed from Jan. 25 – Feb. 1
Lacson on Duterte’s threat to end VFA over Bato’s canceled visa: Where is the connection?
Don't miss out on the latest news and information.