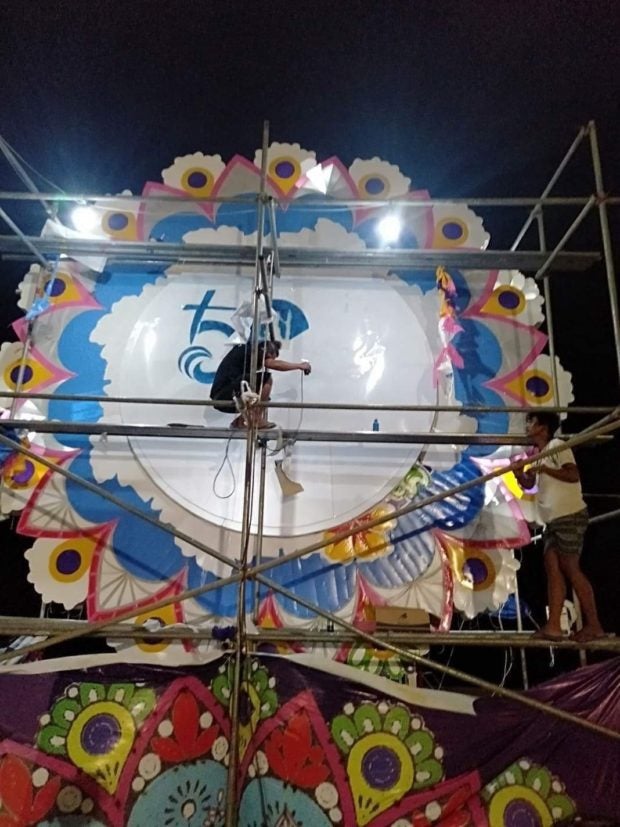 PAMPANGA PRIDE It took 12 Kapampangan craftsmen to make this 20-foot lantern that was later installed in Cebu province for the countdown to the 500th anniversary of LapuLapu’s victory in the Battle of Mactan. –TONETTE OREJAS

CITY OF SAN FERNANDO—Younger generations of craftsmen are fielding entries to the Giant Lantern Festival here on Dec. 14, a sign that the tradition that began 111 years ago has brighter prospects of continuity.

This new breed of craftsmen comes from 12 villages in this Pampanga capital.

“As things have turned out, the best way of preserving the tradition of making giant lanterns is through the family and apprenticeship,” tourism officer Ching Pangilinan told the Inquirer on Thursday.

Christian Lervin Quiwa, 23, and Mark Niño Flores, 24, are the youngest craftsmen in the world’s one-of-a-kind competition so far.

Christian Lervin is a sixth-generation lantern maker, being a direct descendant of the recognized pioneer, Francisco Estanislao, of Barangay Sta. Lucia here.

Big lanterns accompanied religious processions during the Christmas dawn Masses, a practice that started in Bacolor town from which San Fernando was carved from, becoming attractions to the church on Christmas Eve.

Roberto’s heirs have not pursued the craft yet. Ernesto’s sons, Eric and Arvin, are among the most prolific makers of giant and small decorative lanterns to date. Their creations light roads in major cities in the Philippines and abroad.

His cousin, Karl Ernest, the first born of Eric, also created the enormous pieces at 16. He made the steel frame of the lantern for the celebration of the 500th anniversary of the victory of the Battle of Mactan in Cebu province in 2021.

Mark Niño is a second-generation lantern maker from the line of Arnel Flores, a cousin of Ernesto. The elder Flores, designer of the winning lantern in 2019, mastered under Toto Bondoc.

Engelbert and Byron Bondoc, 35 and 36, respectively, apprenticed from their father, Toto, who was mentored by Ernesto. Teddy Aguilar and David Sanchez also learned from Ernesto.

Mary Anne Torres, 37, learned from her father Cesario Sason, a protégé of Susing Maglalang of Barangay San Jose. Torres was the first woman lantern maker in the 2018 festival.

Maglalang and Rodolfo David are the inventors of rotor, the electrical system of the giant lanterns.

Marcelino Ambrocio, 41, and his brother Rolando, 46, learned from Sason.

Teody Aguilar, 48, was trained by Mario Datu who practiced under Juaning Canlas of Barangay Del Pilar.

Florante Parilla, 49, studied in the workshops of Efren Tiodin and Roland Quiambao, also protégés of Datu.

Tiodin, 61, is the oldest lantern maker in the 2019 festival, which is locally called “ligligan parul.”

The training was not structured or even forced on them, Karl Ernest and Mark Niño said in separate interviews. At first, they were allowed to observe how things were done in the shop. They first tried their hands on making the rotor that Karl Ernest called the “bie ning parul” (life of the lantern).

“If we had it wrong, we asked the elders how to do things correctly,” Karl Ernest said.

For him, making giant lanterns is a task that his body wants to do (“panintuan”) and is like a welcome ailment (“sakit ing gugulis”). “I feel that way because it’s in the bloodline,” Karl Ernest said, adding that he would certainly pass the craft on to his son, Axl Primo.

“The tradition cannot stop with us,” Mark Niño said of why he has been teaching his cousins how to make the rotor.

The city government, he said, should help preserve the tradition by establishing learning centers.

“I think there is nothing to change about the features of the giant lantern because it is tradition-based,” said Mark Niño, who is set to finish a course in civil engineering in March.

He added: “I won’t leave lantern-making even if I get employed. It feels good [in the process].”

Quiambao has preserved the designs of Maglalang, displaying these in a small museum he maintains in his shop. Quiambao also holds lantern-making sessions with kids and adults.

At 72, Ernesto is the oldest lantern-maker around. “You must not be selfish [with your knowledge]. It must be shared so that the giant lanterns would continue even after [the older makers] are gone,” said Ernesto who made giant lanterns for 50 years.

He said he is happy that his sons and grandsons picked up the craft as well as the business,

The city government, which brands San Fernando as “home of giant lanterns,” has supported artisans through loans, cooperative organizing and promotions.

This year, the Giant Lantern Foundation will give subsidies of P300,000 to each barangay to add to the donations of villagers.