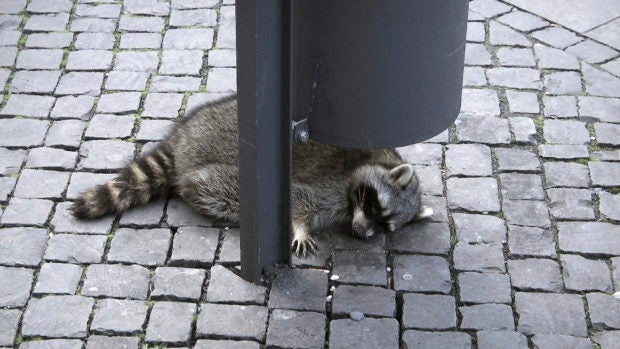 A drunk raccoon found at a Christmas market in Germany was shot dead after supposedly being rescued. Image: WichmannTV via AP

A wild raccoon, which appeared to be intoxicated with leftover wine, staggered in the streets of Germany last Saturday, Dec. 7.

Locals shopping around the Christmas market in the city of Erfurt found the creature passed out under a dumpster. The raccoon apparently sipped mulled wine leftover from glasses, as per Bild via Deutsche Welle on Dec. 8.

A police spokesperson from Erfurt confirmed that the raccoon was “obviously intoxicated.”

“However, a breathalyzer test on the animal was not carried out,” the officer was quoted as saying.

The drunk raccoon reportedly still got up, played with a woman’s shoes, and stumbled around the area before resting on a doorstep.

Local reports initially indicated that the creature was taken to an animal shelter. However, the shelter made a public statement that it was not the case. Ladbible, citing local news sites, reported on Dec. 9 that the shelters apparently only catered to domestic pets.

“Unfortunately, the story of the drunken raccoon did not have a happy ending,” the animal rescue center SWE Tierheim Erfurt tweeted.

“The city hunter took him away and shot him dead,” it said.

A city spokesperson stated that the authorities had no choice but to shoot the raccoon, MDR Thüringen reported via Euronews.

Raccoons have legally been declared as unwanted species by the European Union as per German public radio station MDR Aktuell on Dec. 9. A veterinarian also diagnosed the raccoon’s behavior as a sign of distemper, a dangerous and contagious viral disease that could infect other creatures like dogs. Cha Lino/NVG