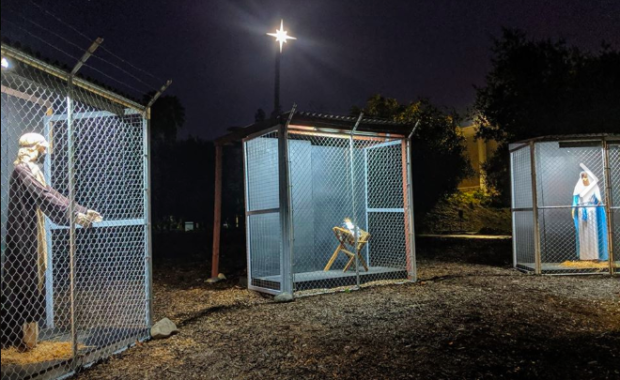 What if the holy family sought refuge in the United States today?

That was the question a local Methodist church in Claremont, California wanted to answer in their peculiar nativity scene where baby Jesus, Mary and Joseph are separated by metal cages.

The caged nativity scene is paired with another depiction of the holy event, one where the family is reunited, located inside the church.

“In a time in our country when refugee families seek asylum at our borders and are unwillingly separated from one another, we consider the most well-known refugee family in the world. Jesus, Mary, and Joseph, the Holy Family,” the Rev. Karen Clark Ristine of Claremont UMC posted on her Facebook page on Dec. 8.

The pastor shared the Bible story where Mary and Joseph were forced to flee Egypt to escape a tyrant.

“They feared persecution and death,” Ristine said. “What if this family sought refuge in our country today?”

Ristine posed an imaginary scenario where Joseph and Mary were separated at the United States’ border.

“Jesus no older than two taken from his mother and placed behind the fences of a Border Patrol detention center as more than 5,500 children have been the past three years,” Ristine narrated.

The pastor also talked about Jesus’ lessons on kindness and mercy, as she said the Messiah welcomed all types of people.

Stirred to tears by the Claremont UMC nativity. Inside the church, the Holy Family is reunited. The theological…

The controversial take on the nativity has been the talk of the neighborhood, ABC-affiliate KABC-TV reported on Dec. 9. The church officials claimed that was their aim in creating the caged nativity scene.

“It was nice for me to see that people wanted to talk with one another, even though they disagreed,” Ristine told the network.

She added, “[I]f this sparks conversation that would be one good goal.” NVG