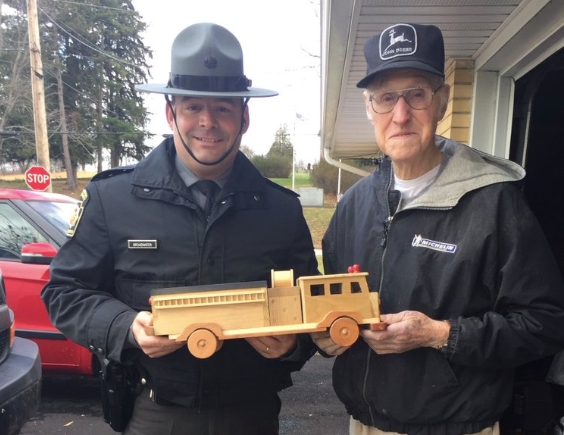 A 93-year-old toymaker has been dubbed as one American town’s very own Santa Claus.

This year, the craftsman is back at it again. Higinbotham donated 300 wooden trucks just in time for Christmas, as seen on Pennsylvania State Police Troop B’s Twitter page last Friday, Dec. 6.

“Just picked up 300 wooden trucks from Ed Higinbotham to be distributed to local kids this Christmas,” the page stated.

93 year old toy maker at it again!! Just picked up 300 hundred wooden trucks from Ed Higinbotham to be distributed to local kids this Christmas. pic.twitter.com/JTzeBfAHsT

“He has been doing it for a long time. I recently got involved to help him distribute these toys,” Robert Broadwater, a trooper from Pennsylvania State Police said in the report.

The police officer noted that the partnership with the toymaker has been successful, and that the toys have been a hit among the children.

“A lot of [the kids] like to paint them, have fun with them. It’s not everyday that you actually get a homemade wooden toy,” Broadwater added. “And I think the young people appreciate that.”

Each handmade toy is also personalized by the craftsman, KDKA-TV reported on the same day. The toys indicate what day and what year he made them.

The Uniontown State Police also plans to give out the wooden trucks to preschools and other groups in the community. The state police has been collecting and distributing Higinbotham’s toys for the past three years.

When asked by WTAE-TV about being the town Santa, Higinbotham answered  “It’s just something that I enjoy doing, and now I make somebody else happy, and if that’s Santa Claus, then I’m Santa Claus.” Cha Lino/JB