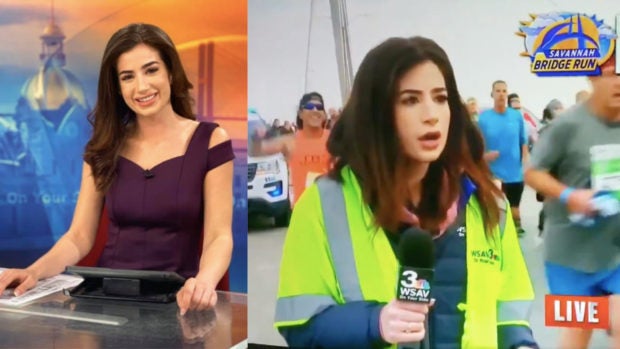 A reporter has filed a sexual battery report against a runner who slapped her backside while she was covering a race in Georgia, United States. The organizer of the race where the incident occurred has also banned the participant who “inappropriately touched” her.

Alex Bozarjian of WSAV-TV was reporting at the annual Enmarket Savannah Bridge Run when a runner passed by and slapped her butt last Saturday, Dec. 7, as per The Atlanta Journal-Constitution on Dec. 8.

One concerned citizen @GrrrlZilla was able to capture the incident and posted the video on Twitter on the same day.

The reporter was talking behind the excited runners in the bridge before a man, later on identified as Thomas Callaway, jogged near the reporter and swiftly smacked her from behind.

The news reporter froze and was unable to react to the man’s action. Bozarjian retweeted the post later that night to call the runner’s attention.

“To the man who smacked my butt on live TV this morning: You violated, objectified, and embarrassed me,” Bozarjian said.

“No woman should EVER have to put up with this at work or anywhere!” she stressed. Bozarjian also challenged the man to “do better.”

To the man who smacked my butt on live TV this morning: You violated, objectified, and embarrassed me. No woman should EVER have to put up with this at work or anywhere!! Do better. https://t.co/PRLXkBY5hn

The Savannah Sports Council also condemned the individual’s actions and has since coordinated with the authorities to give more information about the runner, according to its statement on Twitter last Monday, Dec. 9.

The sports council also said that it will not tolerate the type of behavior Callaway exhibited in the event.

“We have made the decision to ban this individual from registering for all Savannah Sports Council owned races,” it stated.

Meanwhile, Bozarjian has filed a police report with the Savannah Police Department on Dec. 9, where she said that he “smacked” and “grabbed” her butt.

The runner, Thomas Callaway, sat down with Bozarjian’s home network WSAV-TV, to formally apologize to the reporter and the other people affected by his behavior last Tuesday, Dec. 10.

He added, “I am not that person that people are portraying me as. I make mistakes, I’m not perfect and I’m asking for forgiveness and to accept my apology.”

He also claimed that he was only caught up in the moment when he committed the act. He also denied he knew he touched her buttocks.

Callaway also expressed his regret that his behavior took the public’s focus away from the event itself, according to the report. He also accepted the sports council’s decision to ban him from future events. Cha Lino/NVG