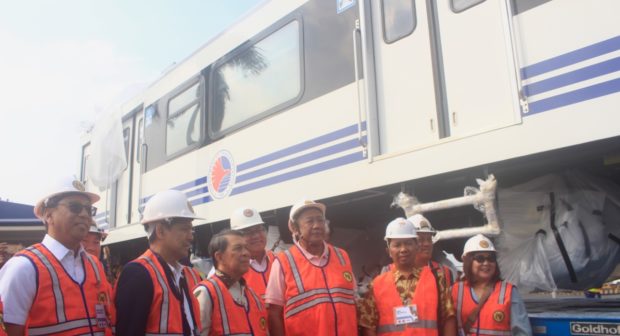 According to PNR General Manager Junn Magno, the trains made by PT Inka — equipped with three cabs each — will start carrying passengers from Malabon to the FTI railway station in Taguig on December 16.

Each trainset has a minimum capacity of 752 passengers, which means that it would increase PNR’s current daily passenger service rate of 65,000.

“After this delivery, because its commissioned already, hindi na namin kailangang i-commission dito (we don’t need to commission it here), we’ll put it in service by December 16,” Magno said on the sidelines of the unveiling of the trains at the Port Area in Manila.

“We will open it on that day after we christen it may biyahe lang from Dela Rosa to Tutuban,” he added.

Magno also said that there are four other trains with four cars coming in by January, which will carry passengers across 36 stations in Metro Manila.  These trains are part of the 37 sets ordered from PT Inka.

“Ito 750 to 800 passengers per trip, and ito mas reliable ito dahil ‘yong mga trains namin ngayon can only make six trips well dahil sa maintenance issues.  We’re slating this for between eight to 10 trips per day so that’s around 8,000 per day, per train,”

Tugade thanked PT Inka and Sarundajang for working with the government for the country’s infrastructure and transportation program.  Sarundajang, on the other hand, reiterated his support for President Rodrigo Duterte’s administration, saying that Indonesia and the Philippines are brothers just separated by the sea.

Sarmiento and Magno said that the trains were procured for around P3 billion through allocations in the General Appropriations Act. The lawmaker also claimed that it was the first time in 40 years that the country was able to acquire trainsets using the annual budget.

PNR is the country’s oldest railway system, spanning over 1,000 kilometers of railway in its heyday.  However, mismanagement has forced it to stop operation in the provinces, although the government plans to revitalize its regional operations.