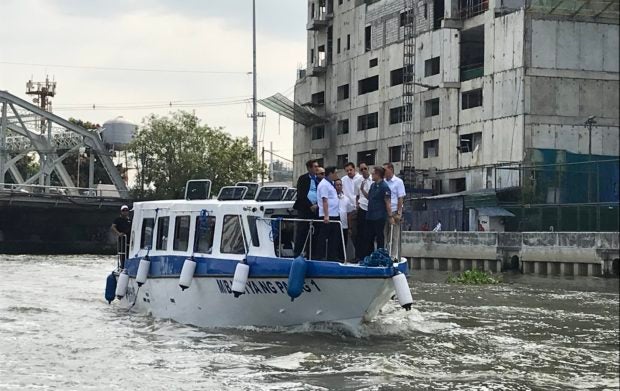 MANILA, Philippines — In time for the holiday rush, the Metropolitan Manila Development Authority (MMDA) officially relaunched the Pasig River Ferry Service on Monday to serve as an alternative mode of public transportation.

“With the anticipated heavy traffic as the holiday season approaches, there is no better time than now to see how Pasig River can help ease our traffic congestion problem,” MMDA Chairman Danny Lim said in a speech at the relaunch ceremony at the Lawton Ferry Station in Manila.

“Frankly speaking, the development of effective river transport services will require time and proper execution even if we have the right budget. But given how Metro Manila is continuously expanding, establishing a reliable mass transport system is a logical step,” he added.

The ferry service, which first sailed in 2014, was revived upon the directive of President Rodrigo Duterte to address the traffic situation in Metro Manila.

According to MMDA General Manager Jojo Garcia, the relaunch of the service would help alleviate traffic congestion, particularly during the holiday season, as there would be fewer vehicles on the road and fewer passengers on the LRT, MRT, and buses and jeepneys.

“How many buses would they need? Two hundred? One hundred buses? How many jeeps? So somehow the ferryboat could help?” Garcia, speaking in Filipino, told reporters in an interview.

He added that the trip from Pasig to Manila, and vice versa, would take less than an hour via ferry.

Manila Mayor Isko Moreno and Pasig Mayor Vico Sotto, who both attended the relaunch, also believe that the revived ferry service would be of great help to commuters — both those going from Manila to Pasig or those going the other way.

The ferry is “an efficient alternative way” to travel, Moreno said.

According to Lim, three additional ferry stations will be constructed in the next three months at the Quinta Market in Manila, Circuit in Makati,  and Kalawaan in Pasig City.

“In the next three months, three additional ferry stations will be constructed to allow for a bigger service area,” he said.

Garcia said Moreno was still looking for possible piers so that there would be more stops to serve more commuters.

Moreno also that the Manila would donate ferry boats to augment those already given by the Pasig City government. Sotto also committed to donating more ferry boats in the future.