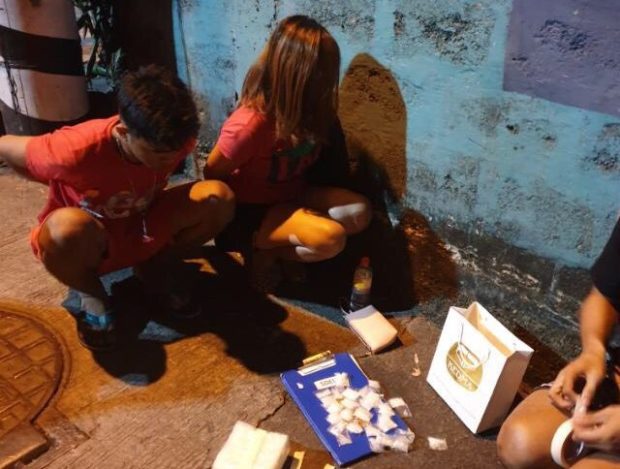 Suspects Christian Lucero and Jomalyn Poblete (Photo from the NCRPO)

MANILA, Philippines — Authorities confiscated some 1.21 kg of suspected crystal meth, locally known as shabu, worth around P8.2 million in a buy-bust operation in Marikina City on Monday.

According to the National Capital Region Police Office (NCRPO), the operation was launched against suspects Christian Lucero, 18, and Jomalyn Poblete, 23.

They were arrested in the operation launched by joint NCRPO units in coordination with the Philippine Drug Enforcement Agency at about 6 p.m. on Libis Street in Barangay Concepcion.

According to police, Lucero is a suspected courier of illegal drugs who works for a woman whose brother is a detainee at the New Bilibid Prison who has contacts with drug lords.

Police said the woman is in the drugs watchlist of the Marikina City Police Station and has been a target for a drug bust.

“She has eluded the long arm of the law by hiding in slum areas where she is protected, making it difficult for the operatives to conduct operation against her,” the NCRPO report read.

Police said the suspects were brought to Marikina City Police Station as they face drug charges. The suspected shabu, meanwhile, will be tested in the laboratory.

Police initially estimated the confiscated drugs to be around 1150 grams and worth P7.4 million.