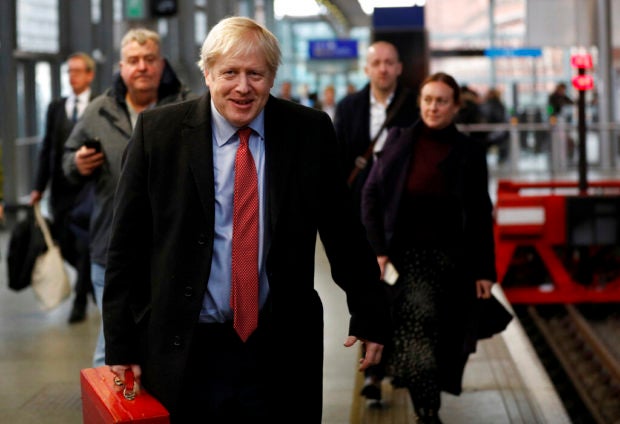 Britain’s Prime Minister Boris Johnson arrives on the platform to board a train in London, Friday Dec. 6, 2019, on the campaign trail ahead of the general election on Dec. 12. Johnson pushed for the December vote, which is taking place more than two years early, in hopes of winning a majority and breaking Britain’s political impasse over Brexit. (Peter Nicholls/Pool via AP)

LONDON — Britain’s Brexit envoy in Washington has quit, saying she no longer wants to “peddle half-truths on behalf of a government I do not trust.”

Alexandra Hall Hall resigned as the embassy’s Brexit counselor with a letter slamming the British government’s use of “misleading” arguments and reluctance “to address honestly” the challenges and trade-offs involved in the U.K.’s departure from the European Union.

Her resignation letter was obtained by CNN, which published it Friday. In it, Hall Hall also accused the Conservative government of “behavior towards our institutions, which, were it happening in another country, we would almost certainly as diplomats have received instructions to register our concern.”
Hall Hall, 55, is a 33-year veteran of Britain’s foreign service and a former British ambassador to Georgia.

The Foreign Office confirmed she had quit but said “we won’t comment on the details of an individual’s resignation.”

The diplomat’s resignation letter is dated Dec. 3 and was made public just six days before Britons vote in a general election dominated by Brexit.