More Filipinos value PH ties with US than with China, says survey

Results of the September 2019 SWS survey released on Saturday show that 78 percent of adult Filipinos value the country’s relationship with the US than with China, while 12 percent said they think Philippines’ relationship with China is more important.

Meanwhile, five percent said the country’s relationship with both the US and China are equally important and four percent did not have an answer.

As of September 2019, China’s trust rating among Filipinos was ranked “bad,” with 54 percent of Filipinos saying they have “little trust” in China, 21 have “much trust”, and 23 percent were undecided.

Meanwhile, the US enjoys an “excellent” trust rating among Filipinos, with 80 percent of respondents saying they have “much trust”, eight percent have “little trust”, and 11 percent were undecided.

In the September survey, the SWS found that those with “little trust” in China value Philippines’ relationship with the US than with China.

Among those with little trust in China, 84 percent believe that the country’s relationship with the US is more important than with China.

The survey also found that more than half of the respondents, or 52 percent, believe that it is possible for the Philippines to have a good relationship with both China and US at the same time. 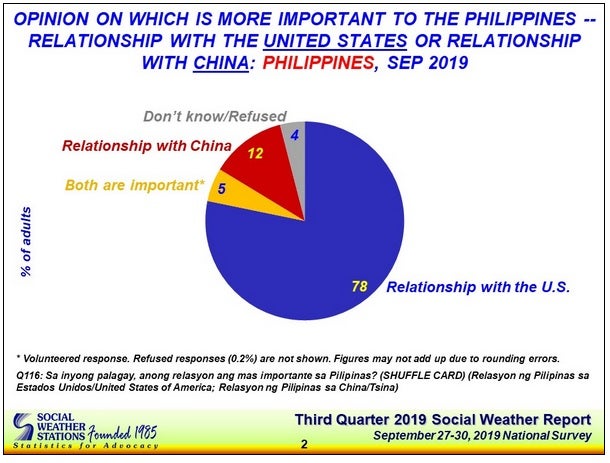 Forty-one percent said it is not possible while seven percent did not have an answer.

Majority of Filipinos who have “much trust” in China, or 67 percent, and 53 percent of those with “much trust” in the US, said it is possible for the Philippines to have a good relationship with both China and US at the same time.

The September 2019 SWS Survey was conducted from September 27 to 30 using interviews of 1,800 adults nationwide. The survey has a sampling error margins of ±2.3% for national percentages.