Trump pulls back on designating Mexico cartels as ‘terror’ groups 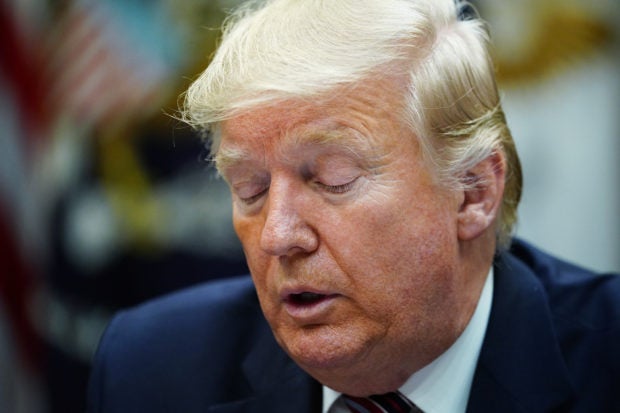 US President Donald Trump speaks during a round table discussion on business and red tape reduction in the Roosevelt Room of the White House in Washington, DC on December 6, 2019. (Photo by MANDEL NGAN / AFP)

WASHINGTON — US President Donald Trump on Friday pulled back on his stated plans to designate Mexican drug cartels as terror groups, saying he was doing so at the request of his counterpart Andres Manuel Lopez Obrador.

Last month, Trump had called for a “war” on the cartels after the killing of nine women and children from a US-Mexican Mormon community, but south of the common border, his plans were seen as unwanted meddling.

Mexican officials asked for clarification, and said they wanted to make progress on efforts to stem the flow of weapons and money from the United States to criminal gangs in Mexico.

Foreign Minister Marcelo Ebrard had reacted more forcefully, saying: “Mexico will never allow any action that means a violation of its national sovereignty.”

While Trump said in a tweet Friday evening that “all necessary work has been completed to declare Mexican Cartels terrorist organizations,” he said he was putting a hold on the move out of respect for Lopez Obrador.

“We will temporarily hold off this designation and step up our joint efforts to deal decisively with these vicious and ever-growing organizations!” the Republican president tweeted.

Trump noted that the leftist Lopez Obrador was a “man who I like and respect, and has worked so well with us.”

The case of the slain Mormons has cast a spotlight on drug cartel-fueled violence in Mexico — and Lopez Obrador’s struggles to rein it in.

The victims, including twin eight-month-old babies, were killed as they drove on a remote road between the states of Sonora and Chihuahua, in northern Mexico, a lawless region disputed by warring drug cartels.