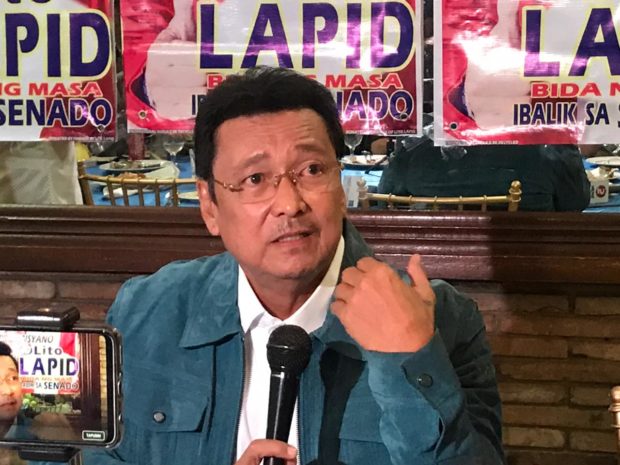 The anti-graft court dismissed the case due to violation of the respondents’ right to a speedy disposition of their cases due to the inordinate delay on the part of the Office of the Ombudsman in conducting its fact-finding investigation on the matter.

In reversing the 2016 ruling, the high court said the Sandiganbayan gravely abused its discretion in dismissing the case against Lapid and his co-accused.

The high court noted that the case against the respondents started on May 2, 2011, through the Field Investigation Office- Task Force Abono of the Ombudsman. Even the Sandiganbayan observed that there was no evidence to show that the Ombudsman commenced and conducted a fact-finding investigation as earlier as 2006.

It added that the panel found probable cause to indict Lapid and his co-accused for graft on September 18, 2013, or two years and four months from the filing of the complaint.

“Thus, from the filing of the formal complaint until the Ombudsman’s approval of the resolution finding probable cause against Lapid, et al, the length of time consumed for the preliminary investigation was three years and one month,” the high court ruled

“In sum, delay becomes inordinate only in the presence of arbitrary, vexatious and oppressive actions or inactions that are discernible from the proceedings. No such delay attended the Ombudsman’s proceedings that would warrant  the dismissal of the criminal case against herein respondents,” it added.

Based on the information of the case filed by Ombudsman, the purchase was made without public bidding as Lapid, based on the certification he issued, said there are no suitable substitute to Macro-Micro Foliar Fertilizer despite availability of a suitable substitute offered at a much lower price in the locality.

The Ombudsman further alleged that the purchased items were overpriced by as much as P4.268 million.

The offense was allegedly committed by Lapid and his co-accused in 2004 when he was still the governor of Pampanga.

The money for the purchase of the questioned items supposedly came from the P728-million funds of the Department of Agriculture for its “Ginintuang Masaganang Ani Program” of then President Gloria Macapagal-Arroyo.

Read Next
Pagasa: LPA outside PAR won’t develop into storm
EDITORS' PICK
Water remains our saving grace right now
Been there, done that but what’s the difference between MECQ and GCQ?
Smart 5G goes live
PNP: Checkpoints back in MECQ areas
A gem of a residence in the new normal
BREAKING: 3,226 latest COVID-19 cases bring PH’s total to 106,330
MOST READ
MECQ guidelines in infographics
Lacson takes up cudgels for health workers ‘threatened’ by Duterte
You’re my ‘idol’ in crafting laws, neophyte senator ‘Bato’ tells Drilon
Education advocate promotes ‘unschooling’ of children
Don't miss out on the latest news and information.