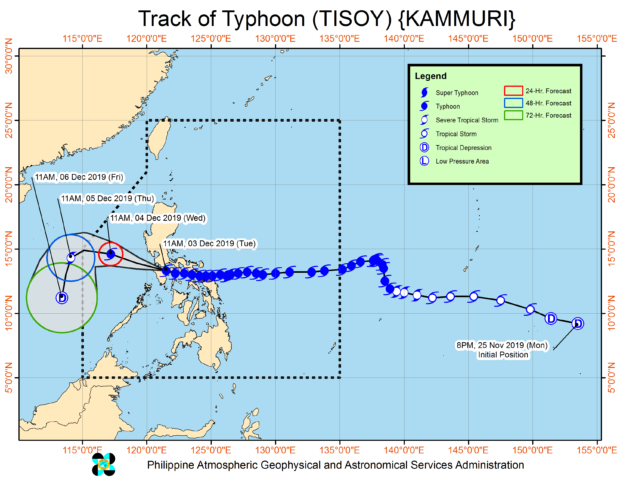 Tisoy first hit land in Gubat, Sorsogon, on Monday night. Its second landfall was in San Pascual, Burias Island in Masbate and its third landfall was in Marinduque – all on Tuesday morning.

Typhoon Tisoy’s eye was spotted at 1 p.m. in the vicinity of Baco, Oriental Mindoro, moving westward at 25 kilometers per hour (kph) as it packed maximum sustained winds of 140 kph and gusts of up to 195 kph.

According to Pagasa, frequently to continuous heavy to intense rains may be expected over Romblon, Marinduque, Mindoro Provinces, and CALABARZON, while occasional to frequent heavy rains may be experienced over the Bicol region, Central Luzon, and Metro Manila until late afternoon Tuesday.

Pagasa also said Aklan, Antique, Capiz, and the northern portions of Negros Provinces will have intermittent heavy rains in the same period.

On the other hand, Pagasa said occasional heavy rains may be expected in Cagayan Valley, Cordillera Administrative Region, Marinduque, Romblon, and the rest of Calabarzon, as intermittent heavy rains will occur in the Calamian Islands.

The state weather bureau advised residents of the said areas to take precautionary measures, especially those living in flood-prone and landslide-prone areas. It also advised them to coordinate with their respective local disaster risk reduction and management offices and continue monitoring weather updates.

Moreover, Pagasa said storm surges of up to three meters are likely to happen in several coastal areas in Marinduque, Mindoro provinces, Romblon, Cavite, and Batangas.

And while the Tropical Cyclone Wind Signals (TCWS) over Ilocos Sur, Biliran, rest of Northern Samar, northern Negros Occidental, Guimaras, and Leyte have already been lifted, Pagasa said Signal No. 3 remains in the following areas:

These areas are forecast to experience 121 kph up to 170 kph winds for at least 18 hours, according to Pagasa.

The state weather bureau likewise said that areas likely to have 61 kph up to 120 kph winds and still under Signal No. 2 are:

Meanwhile, Pagasa said Signal No. 1 is still raised over the following areas:

It also said that gusty conditions may occur even in Northern Luzon areas that are not placed under any TCWS (especially in the coastal and mountainous zones) because of the northeast monsoon or amihan.