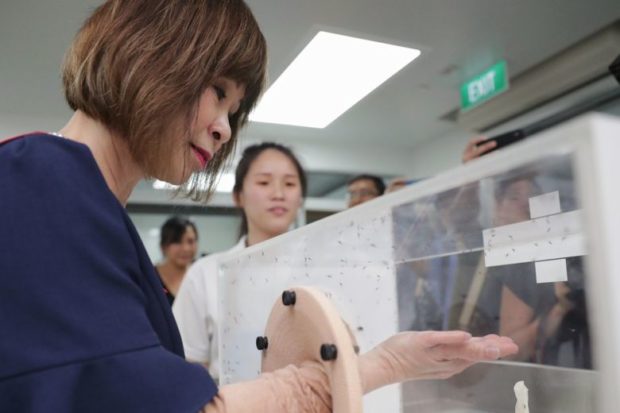 Senior Minister of State for the Environment and Water Resources Amy Khor places her hand in a cage full of male Wolbachia-Aedes aegypti mosquitoes, which do not bite, at the launch of a new mosquito breeding facility in Ang Mo Kio on Dec 2, 2019. The Straits Times/Asia News Network/GIN TAY

SINGAPORE — The war on dengue has received a boost with the opening of a new facility in Ang Mo Kio that can breed millions of mosquitoes a week to prevent urban female Aedes aegypti mosquitoes from producing offspring.

The launch on Monday (Dec 2) comes at the tail end of a year in which Singapore has experienced its third-biggest dengue outbreak. As of Nov 21, more than 14,470 people here had been infected with the disease, with 20 lives lost.

The new facility will allow the National Environment Agency (NEA) to scale up Project Wolbachia by producing up to five million mosquitoes a week.

Speaking at the launch of the new facility, Senior Minister of State for the Environment and Water Resources Amy Khor said: “If we are serious about confronting climate change and other challenges, dengue control cannot simply be just ‘business as usual’. We cannot just do more of the same.”

Explaining the need for action, Dr Khor, who is also Senior Minister of State for Health, said the dengue situation is likely to worsen over the next few decades as a result of global warming.

This is because higher temperatures result in mosquitoes breeding faster, and cause the dengue virus to replicate at a quicker rate.

The new $5 million facility in Techplace II at Ang Mo Kio Avenue 5 is expected to provide scalability in the production and release of Wolbachia-Aedes aegypti mosquitoes needed for Project Wolbachia.

NEA chief executive Tan Meng Dui said the facility’s target capacity a week is a tenfold increase over that of the previous facility, which was located in Neythal Road and is now defunct.

“This facility and the technologies it houses will play a key role in Singapore’s efforts to deploy Wolbachia technology as part of our integrated vector control programme to tackle these diseases (dengue, chikungunya and Zika),” he added.

The highly automated facility in Ang Mo Kio, which is thrice the size of the previous one, incorporates new technology and machines to boost production capacity and increase productivity, including a male-female pupae sorter, which was co-developed by NEA and local start-up Orinno Technology.

The sorter is 10 to 20 times faster than the previous method used to separate the two types of pupae and larvae, and uses lighting, water-flow control and a specially designed sieve to achieve high accuracy and high efficiency in the separation process. 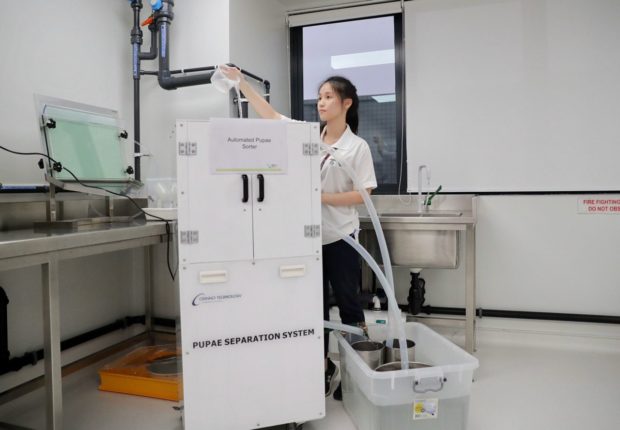 The NEA has also been working closely with the Joint Food and Agricultural Organization of the United Nations (FAO) and the International Atomic Energy Agency (IAEA) to incorporate low-dose X-ray irradiation in the production process.

This step causes any female Wolbachia-Aedes mosquitoes that are inadvertently released to become infertile, preventing any build-up of such mosquitoes, which would hamper Project Wolbachia’s effectiveness.

More devices, such as a high-throughput larvae-rearing system designed by FAO, IAEA and Orinno, are in the pipeline to further improve scalability for Project Wolbachia in future.

Dr Khor said the impact of Project Wolbachia goes beyond the realm of public health.

“The innovative solutions developed and collaborations formed through this important scientific initiative have also advanced research and provided economic opportunities in Singapore,” she added.