In its 11 a.m. Severe Weather Bulletin, the Philippine Atmospheric, Geophysical and Astronomical Services Administration (Pagasa) said the typhoon made its second landfall in Marinduque at 8:30 a.m. Tisoy first hit land in Gubat, Sorsogon, on Monday night.

The eye of Tisoy was located 55 kilometers (km) east of Calapan City in Oriental Mindoro at 10 a.m., moving westward at 25 km per hour (kph), Pagasa noted.

Tisoy was packing maximum sustained winds of 150 kph near the center and gustiness of up to 205 kph, it added. 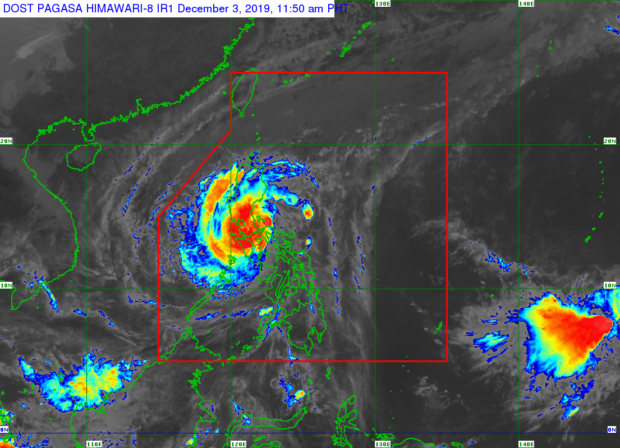 Meanwhile, occasional to frequent heavy rains will prevail over the Bicol region and the rest of Central Luzon as intermittent heavy rains will occur in Aklan, Antique, Capiz, and the northern portions of Negros Provinces, the weather bureau also said.

In the same period, Pagasa said occasional heavy rains will be experienced in Cagayan Valley, Cordillera Administrative Region, Marinduque, Romblon and the rest of Calabarzon while intermittent heavy rains is predicted over the Calamian Islands.

But TCWS Signal No. 3 is still hoisted over the following areas:

The following, meanwhile, are placed under Signal No. 2, since these areas may expect winds of 61 kph to 120 kph within at least 24 hours:

Also remaining under Signal No. 2 are:

Pagasa further said gusty conditions may also prevail even in Northern Luzon areas that are not under any TCWS (especially in the coastal and mountainous zones) due to the northeast monsoon or amihan.

Pagasa advised the public, especially those residing in the said areas as well as in areas prone to floods and landslides, to take necessary precautionary actions, coordinate with local disaster risk reduction and management offices, and continue monitoring for weather updates.