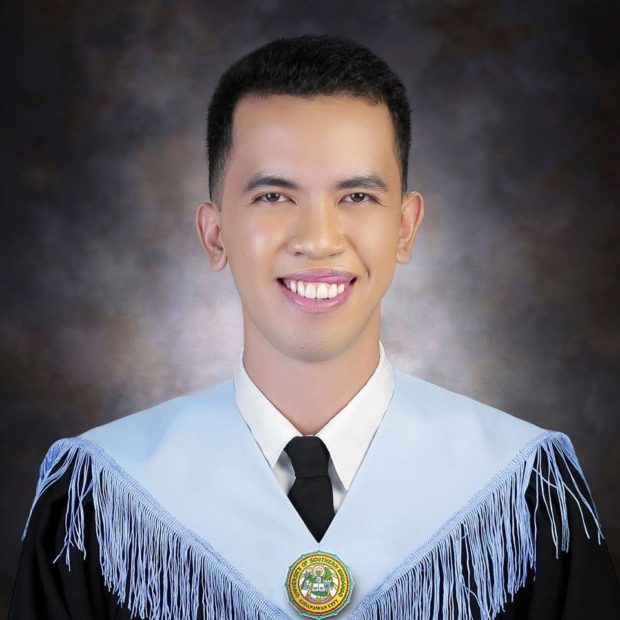 KIDAPAWAN CITY—It’s the stuff inspiring stories are made of.

Marlou P. Camano, of Magpet town, Cotabato province, wanted only to pass the licensure tests for teachers which would be his first step toward working in a public school.

But when the results came out, Camano emerged to be the topnotcher.

“My expectation was only to pass,” he said after getting a 93.40 percent rate in the exams, higher than tens of thousands of others who also took the tests.

The usual dialogue crept out of his mouth. It was “never in my wildest dream,” said Camano, who graduated with a Bachelor of Secondary Education degree, majoring in Math, at the state-run University of Southern Mindanao (USM) in Kidapawan City.

What made the exam results more memorable for Camano was it’s timing. He and his family, along with other residents, are still reeling from a series of quakes that rocked Cotabato province in October and triggered countless aftershocks.

“It was really unexpected. Now I am overwhelmed,” he said. He was talking about the two things that shook his life—the quakes and the exam results.

Of the 92,440 examinees for elementary level teachers this year, 31.34 percent, or 28,973 passed, according to the Professional Regulatory Commission (PRC), which administers the tests and issues professional licenses.

At least 136,523 took teaching license tests for secondary level. At least 38.86 percent of them passed.

Camano, in a radio interview, said he wanted to treat friends and family for just passing the tests. But topping it? “I don’t know how to do it,” Camano said of what could be a bigger treat.

He has been a consistent honor student from elementary to college, graduating valedictorian in elementary and high school.

He said there were people “who really helped, believed and supported me.”

His next step now was to find a job.

Albert Ryan Garcia Eliseo of Southern Christian College in Midsayap, North Cotabato made it to the third spot with 92.20 percent rating, while Angelo Paculio Florague of Notre Dame of Midsayap College garnered 91 per cent, placing him in the eighth rank; while Genevieve Perez, who garnered 90.60 percent, also made it to the top 10.

Three others from North Cotabato landed on the top 10 in the elementary level of LET 2019.

“This is very good news that came while we try to rise from the effects of natural calamities,” said North Cotabato Gov. Nancy Catamco. Edwin O. Fernandez