China to suspend US Navy visits to Hong Kong 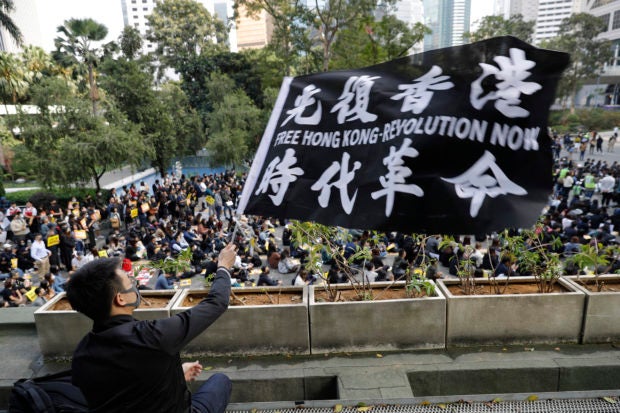 A pro-democracy supporter waves a flag during a rally by the advertising industry in Hong Kong on Monday, Dec. 2, 2019. Thousands of people took to Hong Kong’s streets Sunday in a new wave of pro-democracy protests, but police fired tear gas after some demonstrators hurled bricks and smoke bombs, breaking a rare pause in violence that has persisted during the six-month-long movement. (AP Photo/Vincent Thian)

HONG KONG — China said it will suspend U.S. Navy visits to Hong Kong and sanction a range of pro-democracy non-governmental organizations in retaliation for the passage of legislation supporting human rights in Hong Kong by Congress last week.

Foreign Ministry spokeswoman Hua Chunying repeated accusations Monday that the Hong Kong Human Rights and Democracy Act “seriously interfered” in Hong Kong’s internal affairs and appeared to back up China’s threats the U.S. would bear the cost of the decision.

Along with suspending visits by official U.S. military ships and aircraft, Hua said China would sanction organizations including the National Endowment for Democracy, the National Democratic Institute for International Affairs, Human Rights Watch, and others that she said had “performed badly” in the Hong Kong unrest.

Meanwhile, several hundred people who work in advertising in Hong Kong said they will strike this week to support the anti-government protests in the semi-autonomous Chinese territory.

The advertising workers not going to their jobs this week rallied in a public square in the central business district Monday.

Some held up signs with protest slogans as they sat on the ground listening to a series of speakers.

Hong Kong has seen almost nonstop protests for six months demanding democratic elections and an investigation into police use of force at the demonstrations.