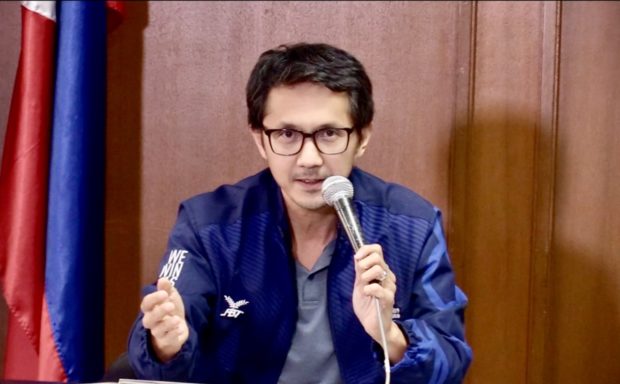 Bases Conversion and Development Authority President and CEO Vince Dizon during the press briefing on December 2, 2019, at the Office of the Government Corporate Counsel in Quezon City. Noy Morcoso / INQUIRER.net

MANILA, Philippines — The Bases Conversion and Development Authority (BCDA) denied Monday that its agreement with a Malaysian firm for the construction of the P13-billion government complex and sports hub at New Clark City in Capas, Tarlac defied laws on public bidding and government circulars.

“I have read several articles saying this project did not go through public bidding or public procurement. I have to correct that right now. It did,” BCDA President and Chief Executive Officer (CEO) Vivencio Dizon said in a press briefing, adding that the project went through a competitive Swiss challenge.

The 20,000-seating capacity New Clark City Athletics Stadium and the Aquatic Center were built by the MTD Capital Berhad in time for the country’s hosting of the 30th Southeast Asian (SEA) Games, which kicked off on November 30 and will end on December 11.

Reports said BCDA officials led by Dizon signed a joint-venture deal with the Malaysian company even after getting a supposed adverse legal opinion from the Office of the Government Corporate Counsel (OGCC) in early 2018.

But according to Dizon, OGCC never gave an unfavorable opinion on the deal. He said OGCC only gave its comments and suggestions, which BCDA had later addressed and clarified.

“If you read the OGCC January 30 opinion and you read the dispositive portion at the end, they never said, ‘BCDA, don’t sign.’ What OGCC did was it gave its comments and suggestions to which BCDA, with the help of its advisers through the ADB (Asian Development Bank), clarified in letters succeeding,” said the BCDA president.

This was also confirmed by government corporate counsel Elpidio Vega, who was also present during the press briefing.

“The contract review issued way back in January was indeed not a negative opinion but in fact, it approved and gave the go signal to the BCDA,” he said, adding that the only problem in the agreement was the modality of the procurement, which was later addressed by BCDA.

Vega said that eventually, after all concerns were addressed, OGCC finally gave its “affirmative opinion” on the deal in October 2018 – even if it was nearly eight months after the contract had been awarded to MTD.

Notwithstanding, Vega said OGCC found no legal impediment to the deal’s execution.

“The question on whether this should have been done earlier, the fact is the first opinion already gave the go signal with regards to the joint venture agreement. In that particular circumstance, the BCDA was really on the right track,” he explained.

Dizon likewise said ADB served as BCDA’s adviser on the transaction – whether on the financial, technical, and legal aspects of the project. He also stressed that ADB would never advise anything illegal.

Dizon further debunked the claim of a source quoted in a media report that the deal was designed to ensure that MTD would win the contract sans public bidding and that its purpose was to “defraud the government.”

“Wow. That is really heavy stuff, but I just want to lay down one very important fact, and that fact is the sports facilities were not part of the original proposal of MTD for Phase 1,” he said.

Dizon then insisted the contract was advantageous to the government because it will not pay a single centavo to the developer until all the facilities are completed and accepted.

He also emphasized that MTD borrowed from the state-owned Development Bank of the Philippines under commercial terms without any guarantees from the Philippine government.

“Now maybe what you are saying is since it’s funded by the national government then that is a guarantee. Well, sorry, I just have to correct you on that. That’s not a guarantee. Why? Because the payment to MTD is contingent upon completion and acceptance,” said Dizon.

“Now if it’s completed and accepted, should the government pay? Of course, the government should pay. Do you think this is free? But it is not a guarantee in the loan,” he added.

Dizon then aired his frustration on issues hounding the facilities being used for the SEA Games, asking why controversies come now that the country finally has built quality facilities for our athletes.

“Talk to our athletes, ask them, what do they feel and what do they think about these facilities? They have been neglected for decades and now that they have these facilities, which were developed with absolute transparency through the best advisers that we can get through the ADB, and yet with one article, it’s just so easy to say it was meant to defraud government, and really it just pains me and not to count the timing of all of this,” he said.

“The facilities built for them after decades of neglect are being attacked unfairly because you did not get enough information. It’s so unfair,” he added.