Sharon refutes Duterte’s claim she wants to kick out Kiko 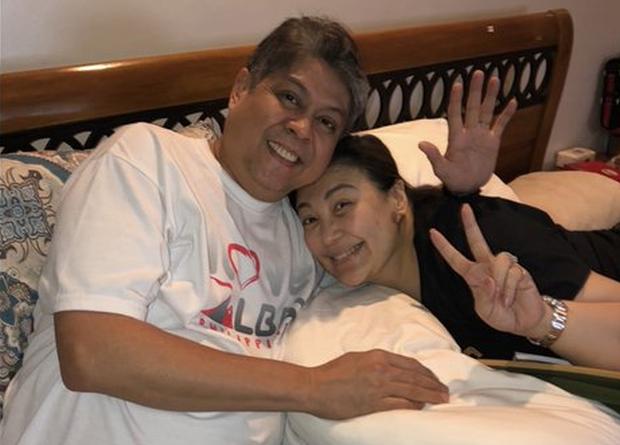 “I just spent the whole day with Kiko, Miel, Miguel, ZsaZsa and Conrad in our farm, so this piece of news sent by Kakie (Frankie) kinda shocked me!” she said in her Facebook page.

“I dunno if it’s true that the President, my ‘Tatay,‘ really said this, and I haven’t been able to see or speak to him since before my brother’s campaign for Mayor! So I don’t know where this is coming from, honestly,” she added.

The singer-actress said her fans would hear directly from her if ever she and the senator would separate.

She also said she did not think anyone would expect this kind of announcement from the President himself.

“Tatay likes to joke sometimes, as you all know, because Kiko’s in the opposition. He has joked a few times against Kiko and about me in the past! Please rest assured that all is fine with my family,” said Sharon.

“My stress comes from other people and things, but right now my family and marriage have never been happier! God bless you all! Love you guys,” she said.

Duterte made the claim on Saturday in Caloocan City to commemorate the 156th birth anniversary of Andres Bonifacio.

He even offered to resign if it could be proven that he was lying.

In the same speech, he was criticizing Pangilinan for authoring the Juvenile Justice and Welfare Act of 2006 which exempts those below 15 years of age from criminal liability.

[His wife wants him out of their home. It’s true. Ask him. If I am lying, I will resign. I am saying it’s true.]

Sharon Cuneta wants Pangilinan out of the house — Duterte

Read Next
Signal No. 2 up in 11 provinces as ‘Tisoy’ maintains strength
LATEST STORIES
After winning title, time for LA Tenorio to give back to Batangas folk
‘Mia’: Rom-com with a cause a career-boosting showcase for Coleen Garcia
No.13 lucky for Orlando Bloom
The ties that bind: Why the guys of Black Eyed Peas prefer to stay together
How Yam handles flirtatious guys
MOST READ
Nadine Lustre’s phone stolen in Brazil
Gretchen Barretto’s daughter Dominique graduates magna cum laude from California college
Lights inside SMX hall flicker as Duterte rants vs Ayala, Pangilinan anew
Will you be the first P16 Billion Powerball jackpot winner from the Philippines?
Don't miss out on the latest news and information.