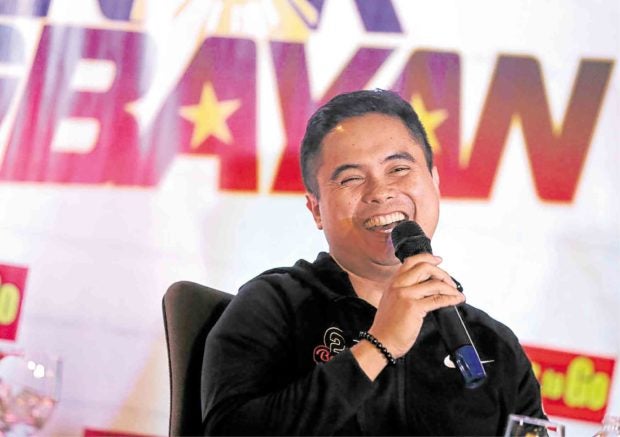 Philippine Airlines (PAL) Flight PR 113 had been in the air just one minute that Thursday noontime, Nov. 21, when the plane’s pilot, Capt. Triston Simeon, knew something was very wrong.

He had heard a startling sound from the engine of the aircraft, a Boeing 777, which was now spewing flames midair. It dawned on him what had happened—“engine failure,” as he described it—and what he and his crew needed to do in the next crucial moments, which would determine the fate of the 365 people on board their plane.

He steadied himself, turned to his first officers, and said, “Just stay calm.”

Within minutes, the Manila-bound plane was back at Los Angeles International Airport, delivering 347 passengers and 18 crew members to safety.

For his “heroism and aviation excellence,” Simeon, 40, was awarded the “Manok ng Bayan” by Chooks-to-Go in a ceremony on Saturday.

“The Manok ng Bayan Award is our simple gesture of appreciation for Captain Simeon’s excellence in aviation and for his display of grace under pressure,” the rotisserie chicken brand said in a statement. “His commendable calm and adroitness reunited people safely with their loved ones.”

The entire ordeal, from takeoff to emergency landing, lasted less than an hour. Speaking to reporters for the first time since the incident, Simeon recounted what happened with the laid-back assurance of someone who knew exactly what he was doing.

He was also the first to say that one error could have sent the plane careening into disaster.

But when asked about the cause of the engine failure, Simeon stuck to the position of Philippine Airlines, for now, that the incident is “under investigation.”

Still, he said, “If the correct procedures hadn’t been applied, the incident would have likely been fatal.”

“We were at a very low altitude so it was really hazardous. It was high-risk.”

Simeon, who has been a pilot at PAL for 14 years and has  more than 12,000 hours of flying time under his belt, said engine failure was not unprecedented.

Pilots at cruising altitude would have more “luxury of time” in that situation due to the high altitude, he said. But because the engine of PR 113 failed immediately after takeoff, the plane’s relatively low-lying position had significantly pared down his window of time to respond.

“We were startled at first, but then we needed to focus,” Simeon said. “We went over what needed to be done, how to manage the situation. We determined our goal was getting back to where we had come from, and the anxiety receded then.”

After running through a series of procedures meant to “maintain and control the aircraft,” he flipped on the speaker and spoke to his passengers for the first time since the trouble began. By then many had noticed the flames on the engine, and perhaps were beginning to be overcome by panic.

Simeon spoke in a steady tone, just as he had done with his officers in the cockpit, each word deliberately chosen for the purpose of deescalation. “The aircraft is under our control,” he said. “We will be landing as soon as possible.”

“Just that term, that we are ‘under control,’ I think it really eased their feelings and calmed them down,” he said.

It wasn’t just words, either —Simeon said there was never a moment he thought they might not be able to execute a safe landing.

Still, this was the first time —“hopefully the last”—that he had to deal with an emergency this serious.

Speaking at the awards ceremony, which coincided with Bonifacio Day, Ronald Mascariñas, president of Bounty Agro Ventures Inc., which owns Chooks-to-Go,  lauded Simeon’s presence of mind. The pilot’s actions, he said, had allowed for a collective moment of national pride.

Simeon said PAL rigorously trained all its pilots to be ready for precisely that situation. But he also seemed uniquely right for the moment. Flying is in his DNA, as Simeon is the son of a former Air Force pilot who, like him, would go on to fly for PAL. (His father retired in 2013.)

This meant Simeon had literally grown up surrounded by airplanes in Lipa, Batangas province, where his family resided in an Air Force base. They would bike close to the hangars and watch the mechanical symphony of planes taking off and landing.

“From then on, it never left my mind that my goal was to be a pilot,” he said.

The next time he will fly a plane is on Dec. 16, when he will be off to Singapore. Asked whether the emergency had given him any preflight jitters, Simeon answered, “Not at all. In fact, I’m excited to fly again.”