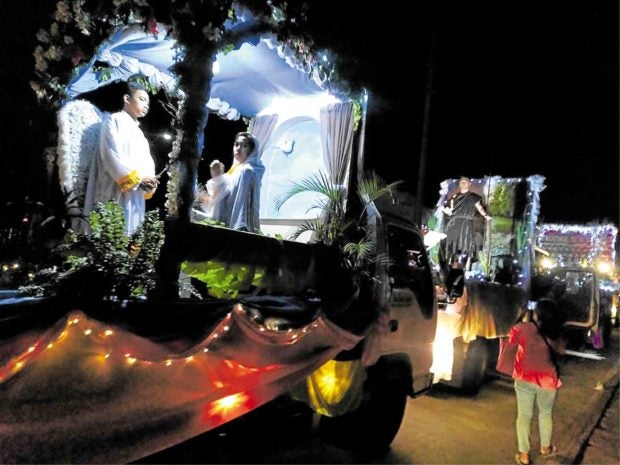 ‘PASKONG BULAKENYO’ The “carrozas,” carrying period-garbed actors, set off from the Basilica Minore Cathedral to the provincial capitol in the City of Malolos for the lighting of a giant Christmas tree to kick off “Paskong Bulakenyo.” —CARMELA REYES-ESTROPE

CITY OF MALOLOS, Bulacan, Philippines — Spreading the spirit of Christmas, eight colorful carriages, or floats called “carrozas,” dramatizing the birth and early days of Jesus Christ, rolled through the City of San Jose del Monte and onto the streets of Bulacan’s capital on Friday to signal the start of the yuletide celebrations.

The carrozas, which carried “living Nativity dioramas” featuring period-garbed actors, had set off from the Basilica Minore Cathedral and traveled to the provincial capitol where officials, led by Gov. Daniel Fernando, participated in the ceremonial lighting of a giant Christmas tree to kick off “Paskong Bulakenyo.”

The carrozas were first launched in 2015 by Fr. Ibarra Catindig Mercado, parish priest of Sagrada Familia Parish Church in San Jose del Monte, who wanted to counter the crass commercialization of Christmas.

“Christmas need not be that grandiose. It can be as simple as having the simplest meal spent with your loved ones. It need not be a vacation, a tour, an outing,” Mercado said.

“Christmas is about family, love, simplicity, forgiving, giving with just simple things … but more so remembering the true meaning of Christ’s birth.”

Like the first Nativity parade, each of the carrozas’ showed details of the Nativity story.

The first carroza was inspired by the oft-quoted biblical passage, “And the Word became flesh and dwelt among us.” The second carriage was devoted to St. John the Baptist, who paved the way for the Messiah by urging people of his time to repent and mend their ways.

The third carroza portrayed the Annunciation, the tale of how the Angel Gabriel revealed to the Virgin Mary that she was pregnant with the baby Jesus. The float carried the phrase, “Your Will be done,” which was Mary’s response to Gabriel’s message, according to Luke 1:26.

The fourth carroza was about the Visitation, or when the Virgin Mary visited her cousin Elizabeth, who at that time was also pregnant with John the Baptist as detailed in Luke 1:39.

As the story goes, Elizabeth told Mary, “Blessed are you among women and blessed is the fruit of your womb. How have I deserved that the mother of my Lord should come to me?”

The actual Nativity tale was borne by the fifth carroza. Like all Nativity dioramas, it showed Mary with her baby in a manger, to depict true humility, as told in Matthew 1:25 and in Luke 2:7.

The sixth carroza showed the young Jesus being presented at the temple by his parents Mary and Joseph, according to Hebrew tradition, while the seventh carroza portrayed the boy Jesus among the elders of the temple.

After three days of traveling, Joseph and Mary traveled back for Jesus when they realized he was missing as told in Luke 2:41.

The annual event did not diminish the impact of Santa Claus, who was portrayed in the eighth carroza as St. Nicholas, the fourth century bishop of Myra in Asia Minor (now Turkey) who inspired the legend of which most children are familiar.

Nicholas was said to have given away all his inherited wealth and traveled the countryside helping the poor and the sick.