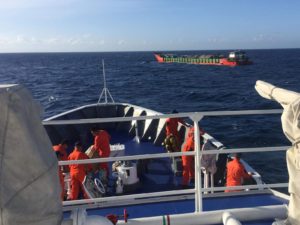 PCG personnel aboard the Multi-Role Response Vessel (MRRV) 4406, BRP Suluan, rescued the crew members on Thursday after their barge was dragged by strong currents.

PCG said BRP Suluan was on routine maritime patrol when it was alerted on the situation of the barge which has been adrift since November 26.

The PCG personnel towed the barge to the nearest bay for sheltering and repair after making sure that its crew members were all safe.