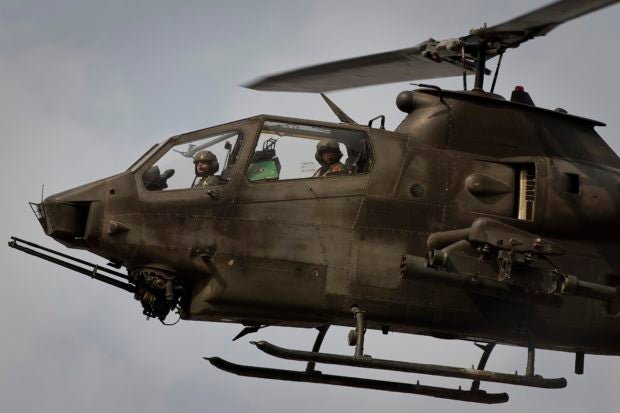 MANILA, Philippines—The Philippine Air Force will have two units of one of the most lethal attack helicopters in the world, the Bell AH-1S Cobra, courtesy of a donation from the Jordanian government.

Hermogenes Esperon, national security adviser and former armed forces chief of staff, confirmed reports by a blogsite that the two helicopters arrived aboard a Russian-made Antonov cargo plane that landed in Clark on Tuesday, Nov. 26.

The helicopters would be assembled and taken to a series of flight tests. They were expected to be in operation by December, Esperon said.

Maxdefense Philippines, a blogsite on Philippine defense, first reported the arrival of the Cobra helicopters and posted photos of the aircraft.

The blogsite, in the report confirmed by Esperon, said the helicopters were delivered to Clark and would be assembled starting on Wednesday, Nov. 27.

While the others are waiting for official statement from the Philippine Air Force, our readers can benefit from reading…

The Jordanian government pledged last year to donate two Cobra helicopters and President Rodrigo Duterte had mentioned this in some of his speeches.

In April, Duterte said Jordan might give more attack helicopters aside from the first two.