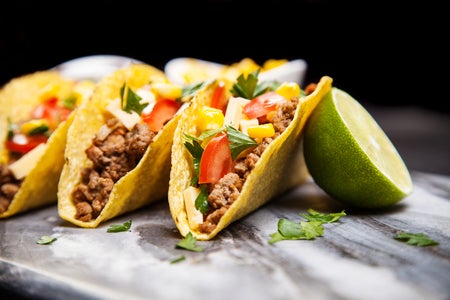 A man claims that he narrowly missed a stray bullet, thanks to a taco he was eating while driving along a road in Arizona, USA.

Ryan Bishop was on his way to the Pima County Fairgrounds when the window on the driver’s side of his car suddenly shattered at around 12:30 p.m. on Nov 17.

He initially thought that the broken glass was due to a rock that might have flown into his window, as per CBS-affiliate KOLD on Nov. 19.  However, when he noticed that there was no oncoming traffic, he pulled his vehicle over and inspected the damage.

As Bishop was looking around his car, he suddenly heard gun-like sounds. He immediately jumped back inside his vehicle and drove away.

Bishop pulled over again and called the police moments later when he was a safe distance away from the incident. He then spotted the bullet on his car’s dashboard while he was contacting the officers.

“I did see something was sitting on my dash, I wasn’t even sure what it was at first,” he was quoted as saying. “I really didn’t want to believe it was a bullet, but the sheriff’s deputies did verify that that’s what it was.”

He explained that the taco he was eating saved him from getting hit by the bullet because it needed him to keep both hands inside the car. Bishop usually drives with his window down and his arm rested on its ledge, which is where the bullet entered his car.

Bishop stressed that if the bullet had hit his vehicle at a slightly higher angle, he would have been shot.

“I’m pretty sure [eating a] taco saved my life, or at least stopped my arm from getting blown apart,” he said in the report. “I had the window closed because I didn’t want pieces of the taco flying around.”

Bishop hopes that by speaking up, the shooter will reflect on how they could have taken someone’s life. He also urges people to not shoot near main roads that are used by many drivers every day.  Ryan Arcadio /ra